In 2019, a film won "Best French-language Film" at the Cannes Film Festival. It's a film that focuses on extreme class issues (this is France after all, Vive la Révolution!) and its stars include mega-yachts, a beautiful girl who trades her body for the pleasures of opulent wealth, and also a sextant. The sextant plays a pivotal albeit very small role in the plot. What do you make of this exceedingly valuable sextant? What does it tell us? How much would you pay for this shiny, golden sextant??

When I advise students on sextants, my primary recommendation for online purchases is "if it's shiny and golden, it's probably fake". That does not apply to the young woman who stars in the film, and I do believe that the fact that she is filmed "shiny and golden" in a number of scenes is intentional. The wealthy men in the film want her as an object, like the sextant, which is of course a truth of history. The image of her that I have included below is the title frame. It gets the basic point in front of the audience right away: "she is hot, and men will do anything for her". I have added two black squares to the image to make it "safe for work" though I'm aware that's hypocritical, especially considering La Liberté. I was hoping that we would get a scene with her demonstrating her sextant skills, but that would probably have been heavy-handed, so no, only sex.

The film is (or was) available on Netflix. Here's a review. 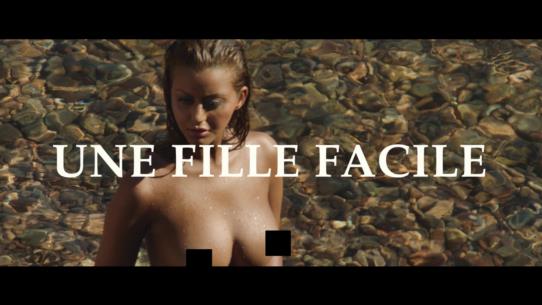