Bob Goethe, you wrote:
"not only could it track stars in daylight (which is impressive, but might not be that hard to do at 60,000 feet), but it could do so in daylight at sea level..."

Yeah, seeing the stars in daylight seems like magic to us, but we're biased by our biological limitations. The stars don't disappear in daylight. They're not even reduced in brightness. They're still there, all day long, just as bright as they always are, but in daylight they have to compete with skyglow. This is a contrast problem, and our biological sensors --our eyes-- are not designed for such feats. Apparently with the right design, it's much easier for electronic sensors. There are limits, of course, and I have never seen a photo of a nebula taken in daylight from sea level... And faint stars?? I wonder where the magnitude limit lies. Also for a navigation system, I assume that it's dependent on an approximate estimated position to get the ball rolling. That is, the system presumably needs to know that a given bright star is somewhere in its field of view, which is probably a degree or two across.

Here's a challenge: can you photograph stars with a common digital camera in daylight? It should be possible. I have photographed Venus in daylight many times. But how about Arcturus or Vega?? I suppose one would need to save images in a "raw" format, else the usual jpeg compression algorithm will smooth right over those little increase in brightness in the blue sky... And what about the ISS (International Space Station)? It's frequently brighter than Venus. If you could photograph that in daylight along with a few first magnitude stars, then you've got accurate position-fixing data several times per day.

You mentioned that the Northrop navigation system had 32 KB of RAM expandable to 64 KB. That's actually quite spacious for a single-function computer. Remember that home computers in this era, the early 1980s, had similar amounts of RAM, and they normally included some sort of memory-hungry user interface. The Apple IIe, for example, had 64 KB of RAM standard, and I myself coded numerical integrations of the two-body gravitational problem with reasonable success on that little computer... way back then.

Since I'm waxing nostalgic about the 1980s, I'll dial the atavachron back a few more turns to 1976 for today and a bit of science nostalgia (cross-posting; a few of you have seen this already): Forty years ago today, on 20 July 1976, Viking 1 landed on Mars, the first successful landing (an earlier Soviet lander failed within seconds). I remember getting up early that day in the summer before 7th grade to watch the tv coverage from NASA/JPL. I sat by myself at home watching as each vertical stripe of the image slowly appeared (data rate was roughly equivalent to a "1200 baud modem" or about 1 kbps). Would there be evidence of life?? Just maybe?? Or even more outlandish, a hint of some lost civilization?! Alas no, it was rocks and dust and lifeless dirt... but it sure was amazing seeing the very first photo arriving from the surface of the planet Mars. See below... 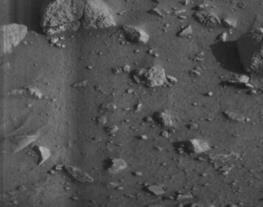