The "sea day" is an example of maritime culture, and it varied in the fashion that all cultural trends obey. There is no date that you can point to and say "it ends here" except in those segments of the maritime world that were under some central command, like the Royal Navy as Don Seltzer has mentioned. On American merchant vessels, the "sea day" or "nautical day" continued in use with declining frequency into the latter half of the nineteenth century. The evidence for this, however, should be sought in logbooks, not navigation manuals. For example, Rob van Gent you mentioned the 1874 Bowditch. As Herbert Prinz has already mentioned, this was not a current edition but rather an 1874 "printing" from earlier plates. Usually these are described as the plates that were finalized in 1867/68 and they were used to print copies of Bowditch right through 1880. This is true enough, but it should also be said the Bowditch's Navigator was only lightly edited after Nathaniel Bowditch's death in 1838, and even while he was alive, much of the material in the Navigator originated even before his own initial publication in 1802.

This is an example of a general principle: studying historical navigation manuals absolutely does not teach us about the history of navigation as practiced except when a manual is new and freshly authored (and even in that case, there are limits). Studying historical navigation manuals teaches us the history of navigation manuals. That may sound obvious, but there can be a wide gulf between education and practice. Imagine trying to interpret the history of mathematics by studying secondary school math textbooks. What a distorted picture that would create. Furthermore, even when the work is fresh, textbook authors inevitably have axes to grind, ideas they want to spread, practices they want to cultivate and others that they want to expunge. They are not witnesses to history. To understand history, we need to go to primary source evidence. We need to look to the logbooks, journals, and other notes of the actual navigators and mariners written in the era for their own use. And thanks to Herbert Prinz for setting me up to say this, by the way!

Reading logbooks in the collections at Mystic Seaport Museum, the New Bedford Whaling Museum, and the Providence Public Library, I have tried to develop a general picture of the changing culture of navigation on American merchant vessels in the nineteenth century. The last example I have seen of the "sea day" dates from 1859. A navigator sailing to Japan notes events in terms of the sea day throughout his logbook (which is antiquated in style in other ways). In particular he notes at one point that he has ended a day of "36 hours in order to commence a harbour log" as seen in the attached image. This is an example of switching from the sea day reckoning of dates from noon to noon to the civil day reckoning from midnight to midnight. At this date, the sea day seems to have been near the end of a general decline on American merchant vessels. This was a late date to be recording events in "sea days". You can call it "mostly over" by 1850. And I'll add here that the history of cultural events should not be treated like mathematical proof: a single contradiction does not disprove a theorem. Specific to this question, if we assert that the sea day was mostly over and done with on American merchant vessels by around 1850, then this single instance (as described above, from 1859) does not mean that this assertion is wrong. There are always individual choices in cultural fashions. An individual case does not over-rule the general cultural trend. 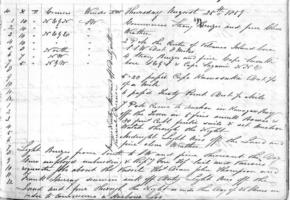