Those additional latitude and longitudes lines add nothing...

I agree, for the most part. I usually draw them anyway for two reasons: as a visual aid to the vessel's position relative to the other parallels and meridians, and as a convenient mark from which to measure when plotting multiple fixes on the same sheet. If, for example, I'm plotting fixes in the southern hemisphere for a vessel moving south, I may want to plot the first fix on the upper half of the sheet. Having the upper parallel there to measure latitude from helps me to avoid making any mistakes when it comes to measuring positions. Are they necessary? No, it's just as easy to measure without them. But, I personally find it reassuring. It's a matter of preference, I suppose.

Don't get me wrong, I've plotted plenty of fixes without the extra parallels and meridians. Attached is an example*. But it's not as if it takes a lot of extra time or effort to draw them in.

*I'm not sure why I drew two diagonals the way I did. 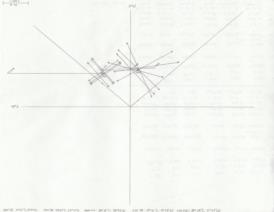