To recap......  I did not know where I was. By various means I concluded that I was somewhere in the southern ocean near New Zealand:

I determined the approximate time of noon and estimated that my long was about 174°E.

I took a sight when the sun was on the prime vertical which gave a long of about 176°E.

By various means I concluded that my lat was somewhere between 22°S and 52°S.

I selected 52S  174W (not a typo) as my AP.  Why W I do cannot remember. I wanted an extreme AP but I think I may have made an arithmetical  mistake.

I worked the long by chron as an intercept. I then took a sight with my AH when Ho was  < 60° and calculated the intercept.  I plotted the intercepts on google-earth and selected 43°S  176°E as a new AP. I chose in integral number of degrees so I could work the sights with 214.

I  have not yet used the new AP but from the diagram I can confidently conclude that the solution is converging. 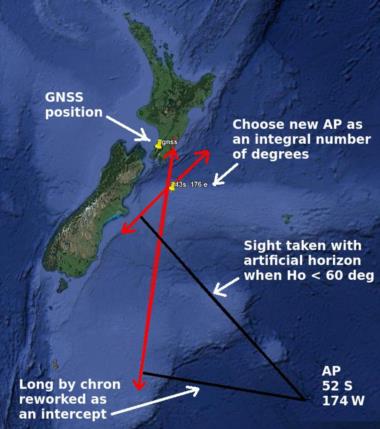