And from the second part of the video, here's George Maynard navigating Scud across the Atlantic. Mary notes in the presentation that he learned his celestial navigation from Don Treworgy at Mystic Seaport.

I learned celestial from Don Treworgy just about three years later (by the way, that's pronounced "truer-gee"). That class was in July of 1978, the same summer that the journal of the Institute of Navigation devoted their entire issue to this new thing called GPS. As many of you know, the planetarium at Mystic Seaport was re-dedicated as the Treworgy Planetarium a few months before Don passed away in 2010. Speaking of which, it appears we'll be having our navigation conference there at Mystic Seaport again this fall. The weekend of November 3-5 is currently scheduled, dates to be finalized within a week. 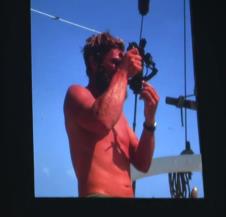