I first learned of Joshua Slocum's "Spray" and his voyage recounted in his book "Sailing Alone Around the World" when I was about 7 years old. A local family was building a replica of the Spray which they intended to sail around the world. OK. I guess that's what everybody does (that's how you think when you're a kid). They did it, too. They left when I was about 9 and came back when I was 14... "Hey... how's it goin'? how was the other side of the globe?" --I think thats what I said. I missed the live presentation, but the videos of a wonderful presentation by Mary Maynard Drake have now been posted online. Here's the playlist:
Scud Around the World.

By the way, some other neighbors also built a boat and sailed off around the world a ccouple of years later... It's just what people did in Noank, Connecticut (Noank is two miles down the coast from Mystic, Connecticut and those two villages together would make one logical town in a world of different borders). 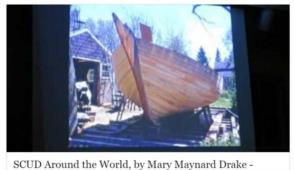