I meant to include this little quotation (attached image) in my last message. The world's astronomers were rather universal in their assertion that the twentieth century did not begin until January 1, 1901, and most people in power and most governments accepted that conclusion at the time, again with the major exception of Germany. Flammarion's logic involving dozens is a clear case of one-based enumeration. You start with one and 12 is included in the dozen. And by that logic, a century starts with 1 and the 100th is included in the century.

As I noted in my last message, the current system of listing decades and centuries has switched to zero-based counting. And, yes, in case you're wondering about a dozen eggs, the majority of software systems would number the eggs internally (internal to the software... not the eggs!) as 0 to 11. Counting from 0 to 11 makes a dozen just as much as counting from 1 to 12. Note well that I refer to the "majority" of software systems. It's still just a preference, and it can change. Just last week, I spent some time learning an increasingly popular "basic" computing language called "lua" which reverts to using one-based counting in its data structures. What's old is new again. 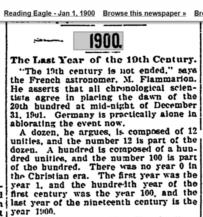