I posted a copy of the Rust diagram in the past which is found here:

The explanation for the use of the diagram is here:

I had the diagram scanned again today to obtain a cleaner image which is attached. Unfortunately, the scanner could not handle the large diagram in one scan. If you prefer you can tape the two parts together to make one large diagram, or if you have the skill you might be able to cut and paste them into one diagram, I don't know how to accomplish that.

Attached is Rust's diagram for computing the azimuth of the sight which
> was included in Weems "Line Of Position Book," 1927. It was developed
> using the sine formula. You enter on the left with LHA and go to the
> right to the declination then straight up to the altitude then to the
> right to the azimuth. Also included is a table used to determine in
> which quadrant the azimuth falls when the body is close to east or west.
> This diagram can be used with any set of tables, H.O. 208, H.O. 211,
> etc., and the extra steps used in those tables to compute the azimuth
> can be disregarded.
>
> The shape of these curves show the potential loss of accuracy using the
> sine formula as the azimuth approaches 90º as the altitude curves become
> almost vertical and only slight changes in altitude results in large
> azimuth changes.

In most situations there is no ambiguity as to which
quarter the Zn lies since you know the approximate direction you are
looking when you take the sight. The problem arises because the azimuth
angle is limited to the range of zero to 90 degrees and when the Zn is near
east or west the correct Zn might fall either
side of the line so there is an ambiguity in converting from azimuth
angle to Zn.

The second rule to apply is that if the declination is contrary then the Zn
must be in the opposite semicircle. To generalize this rule, if the
declination and the latitude have contrary names then you start with the
direction of the depressed pole (the further pole) when converting from
azimuth angle to Zn.

These two rules take care of most of the cases, especially for
navigators in low latitudes. 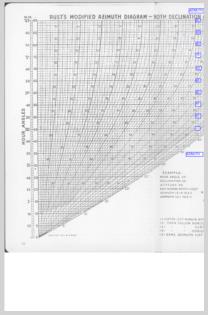 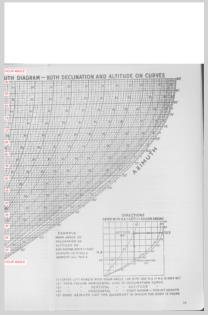