I’m not absolutely sure that I understand your point but let me make sure we are clear about what I was saying in the paper so that we are not at cross purposes. Assume a GP at 0°N 0°E on the surface of the ellipsoid and a Locus of Position (LoP) with “radius” θ. In other words for any observer standing on the LoP their vertical makes an angle θ with the vertical at the GP and this is true for both the sphere and ellipsoid. In particular we know that the points θ°N 0°E and 0°N θ°E both lie on the LoP. What I was saying in the paper is that in the case of an ellipsoid the geodesic distance over ground from the GP to θ°N 0°E is different from the geodesic distance over ground from the GP to  0°N θ°E. In the former case you are moving along the meridian following the arc of an ellipse and the distance is given by a LP(θ). In the latter case you are moving along the equator in the arc of a circle and the distance is a θ. Here a is the Earth’s equatorial radius and LP() is the meridional arc length function discussed in the paper. I attach a graphic that illustrates what I am saying. In the case of the sphere LP(θ)= θ  and the distances are equal. This is what I had in mind when I wrote “On the sphere, points on the LoP all lie the same geodesic distance from the GP; however this is not true for an ellipsoid.” Granted it’s not directly relevant to the topic I was discussing at the time. It was more of a note for my own understanding.

If the point you are making is that the equation for the LoP and hence the coordinates of the of points the lie on the LoP are the same for the sphere and ellipsoid then I absolutely agree with that and said as much in the paper “This formula follows from the familiar cosine rule of spherical trigonometry but because geodetic or astronomical latitude and longitude on the surface of an ellipsoid are defined from the direction of the normal to the surface it applies to both the sphere and ellipsoid.”

Let me know if you still think we have any disagreements or if I have missed your point completely. 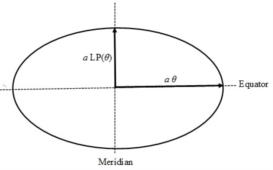