Thanks once again to all those who responded with their estimate of the coincidence time in my little experiment.

A number of people described the different ways in which they determined their estimates. Some used the facility to stop the movie, re-run it and/or examine it frame by frame. A number of different strategies were used. Some used the disapperance of the red on the left side and counted forward, some the appearance of the red on the right side and counted back, some took the complete disappearance of the red as they judged it, some took a number of measurements and gave me the mean. That is all OK, in my view, as the aim is to determine the accuracy of someone familiar with making such estimates with such an apparatus, and determining the best strategy is something one only learns from experience.

I have had 19 responses (so far) and it is tempting to throw all sorts of statistical methods at the data to obtain mean, standard deviation, confidence level and so on. But to my mind the statistics is best summed up with the plot below.

As you can see, about half the estimates are within half a second of the 32 second mark. This tells us pretty much all we need to know to conclude that the apparatus is capable of determining the moment of "local noon" to within one second. That is a pretty remarkable result considering the number of different observers, each with their different strategy, and the fact that only one observer (me) knew anything about the apparatus at all, so really had no idea about what was going on. My own estimate was 31.5 seconds, for what it is worth, but I can now say that the result appears to be observer independent within the limits of +/- half a second, which again is a remarkable result.

I am disappointed that nobody has stuck their head above the parapet and had a guess about the nature of the apparatus. Frank said that I had given no clue as to its nature, but actually, I have said - and you have seen - everything you need to know to determine how it works.... I will add that there are only two optical components involved.

Anybody care to start the ball rolling? 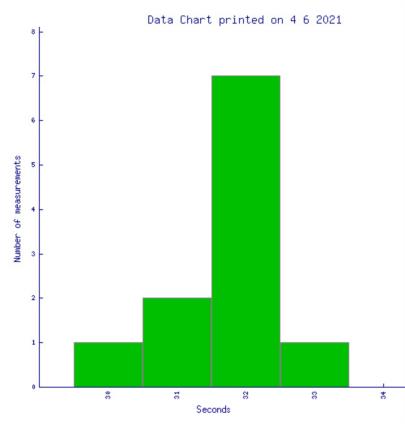