Frank you mentioned the Snellius Construction.

I can remember being taught this method of fixing on a night-school Yachtmaster course in 1982 by an ex-Merchant Navy Officer.  I never used it in anger, because inexpensive Decca became available to yachties shortly afterwards followed by the ubiquitous GPS.  I’ve tried to remember how to do it many times since without success.  Now I can see now how it works.  The angle at the centre of the circle is twice the angle at the circumference.  Constructing the isosceles triangle ACB in the diagram below, means the angle BAC must be 90-x, where x is the the angle measured between A and B.  It would have been invaluable to ships transiting the NE Coast of England where there are lots of visual features, let alone to Bligh charting on Cook’s third voyage.  When analysing H2S photographs we always used a DIY tracing paper pelorus.  Perhaps the using the Snellius method might have given less subjective results.  DaveP 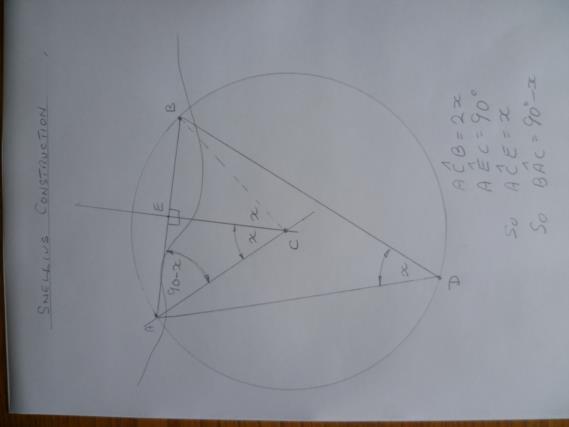