Following my curiosity, I have been allowed to make a full inspection of a collector’s reflecting circle. Its scale bears an engraving “W Harris & Co 50 Holborn London”.   According to the Science Museum Group, this company traded between 1816 and 1835.

It differs from most documented reflecting circles in several ways. I make this post to ask if anyone can enlighten me on its intended use. Some of the features may indicate a purpose other than celestial navigation – if so, I apologise for being off topic.

1. The scale markings on the circle are on the opposite side of the frame to the telescope and mirrors.

2. One arm (nearly parallel to handle in the attached Scale Side image) is fixed to the frame. The circle, engraved 0 - 360°, is supported by the vernier mechanisms at both ends of this arm. (The other arm is a conventional index arm, moving with the index mirror.)

3. When unclamped from the fixed arm, the circle has endless rotational freedom. The verniers at both ends indicate the degree of rotation.­­­ Such rotational freedom is obviously more than a means of removing index error.

4. Two adjustable stops are fitted to a dedicated scale on the frame side that allow the index arm movement to be restricted in either direction to any chosen angle below the maximum of +/- 70°. (Marked on the scale as +/- 140°). One of these stops is visible in contact with the vernier at 6 o’clock in the Telescope Side image.

5. A very robust frame bracket and insertable knob appears to allow attachment to some means of support. 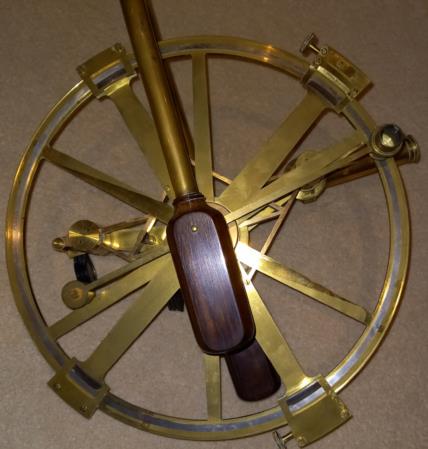 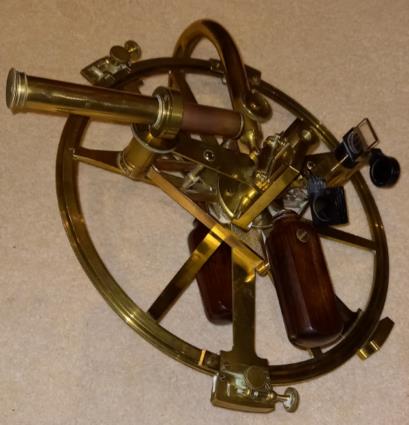