I have to add one more thing. In he video Gillespied repeats his claim that there was a blob on a 1937 photo that his photo interpreter said shows one of  Earhart's landing gears stuck on the reef of Gardner island. He claims that independent photo interpreters at the U.S. State Department confirmed this interpretation. I had to file a Freedom of Information Act law suit against the State Department, (they stonewalled me for two years) to find out if this claim was true. Internal State Department documents said  that they "could not definitely say if it was or it was not an aircraft part"! 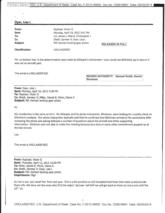