The feature on the instrument is indeed used for the so-called ‘back observation’. In this mode the observer turned his back to the object whose height was to be measured and looked at the horizon opposite the object. The back observation was used when the horizon under the object was unclear or obscured. The drawing attached shows the optical path of a ray during a back observation; it is taken from Willem Mörzer Bruijns, ‘Schip Recht door Zee, De octant in de Republiek in de achttiende eeuw’, Amsterdam 2003, 36; it is also shown in his ‘Sextants at Greenwich’, Oxford 2009, 47. To be able to see the horizon the horizon mirror had to have a slit as you can see in the picture of one of my octants.

It could also be used for angles greater than 90 degrees – for instance in measuring lunar distances - as discussed by Nichols, Hadley’s Quadrant – The Back Observation, in: Bulletin of the Scientific Instrument Society, Vol. 2 (1984), 8, but that seems to have been only a theoretical possibility as at the time that lunar distances became practical – after the publication of the ‘Nautical Almanac in 1767 – the sextant had already been invented and introduced.

To give more information about this particular instrument one needs better pictures of the details. Willem Mörzer Bruijns' book has a lot of pictures where one could look for similar features. 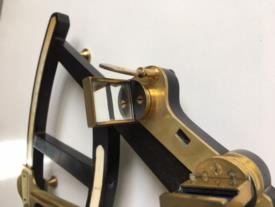