Back to my story. So there I was near Beavertail Lighthouse shooting the altitude of the Sun every few minutes. I've done this quite a few times recently, testing out my "GPS Anti-Spoof" app and the results have been amazing. I'll have more to say on the value of this process down the road. For now, what the heck was going on with that sudden jump in intercepts? I was getting values clustered close to zero with more than two-thirds within a quarter of a minute of arc of zero intercept... and then wham... 23-24 minutes for three intercepts in a row! As I noted, I ran out of time for more testing, but of course ideas were going through my head right then and there... and continuing as I drove home... and as I drove around running errands until sunset.

After the first surprising wild sight, I checked some things. For example, Alan mentioned the possibility of "grievously" mis-reading the sextant. And Randy suggested that I might have "made some mistake in reading the sextant." And I agree. This is the first thing that one should check. Fortunately, the way my app is designed, nothing goes away. That is, it is arranged so that the continuously calculated, real-time altitude can be paused as soon as I take a sight (usually at a fixed five or ten seconds after so that I have time to reach down and tap the display). And of course, I did not adjust the sextant after the sights. So I looked long and hard when I saw that first 23' error. I carefully double-checked what I saw displayed on the screen, and I carefully examined the micrometer to make sure I had not looked at the wrong "tens" or counted ticks down from a "ten" or something like that. All good on this front. So we move on...

My next thought matches Ken's suggestion: perhaps the micrometer's gear teeth were not seated properly in the grooves on the arc. This I've experienced before, and I usually try to give the arm a little back and forth tug whenever I move the index arm by a large distance. But maybe I didn't do that right this time around. So I checked this carefully, spun the micrometer a degree or two to make sure it was moving smoothly and then shot those two additional sights which also yielded intercepts/errors over 20 minutes of arc. Something was still wrong... By the way, I think this also addresses Don's suggestion about possible backlash. A little backlash can occur, but I did test for that. And just for the record, that nice run of eighteen Sun sights with a majority within a quarter of a minute of arc of correct were down with some clockwise completion on the micrometer and some counter-clockwise.

At this point, various theories were running through my head as I called it a day. It would have been rude to interrupt my conversation with the folks who were asking what I was doing, so I packed up without making more tests. But at least I had the presence of mind to write down the two last numbers from the last observation: the calculated sextant altitude as displayed by the app was 56° 25'. The observed sextant altitude was 56° 49'. And the approximate time of that last sight was 17:27 UT.

I was intrigued that no one mentioned the possibility of software failure until almost noon the day after I described this puzzling set of observations. Hewitt was the first to suggest "the app having a hissy fit". But this was high on my list of concerns. Could the app be broken? Did it somehow jump a day ahead in its calculations? That would be a very strange bug, but like Bill Morris, Michael, and Noell, I had the odd feeling that it might be a one-day jump in the declination, since this was about the right scale to match the discrepancy. This was a depressing thought since it was my app, but it was the primary theory running through my head while I was shopping for cat food (there's nothing like being depressed about a software bug when you're buying food for someone who doesn't pay rent). A close second was the possibility that the sextant had somehow "jumped". More about that in a minute.

Greg suggested in a later post that maybe I had made an entry error in the app, and Noell suggested the possibility that I had entered the wrong date manually. These would be viable concerns with many apps, but I have gone to some lengths with this app to make sure it asks for as little as possible from the user. Data entry is not a concern except at the initial set up where you have to enter height of eye and index correction. I only did that once before starting this run of sights. So that's out...

When I finally had a moment at home, obviously I needed to decide between the two main possibilities: app/software error, or sextant error. And this is exactly what David suggested that I had to resolve: "was the jump in heights measured with the sextant or heights calculated for the assumed position?" Luckily, this was relatively easy to check since I had recorded the displayed and observed altitudes near the time of my last sight. Note that since it was close to local noon, the exact time did not matter much. I hit the USNO web site here http://aa.usno.navy.mil/data/docs/celnavtable.php, entered all the appropriate data and compared (note that my app gives sextant altitude of the Sun's LL directly so I had to do the usual steps in reverse to get Hs from the Hc listed there). This step confirmed that the displayed altitude was believable within a couple of minutes of arc at least and probably much better. It could not be the source of a 23-24 minute error. And therefore the app was apparently ruled out as the villain in the story. Phew...

So what could cause a sextant to "jump" in its readings? Ed suggested the possibility that the shades or their mounting shifted, introducing some new prismatic error. Although individual shades can have their own specific prismatic errors, there's no net effect from the orientation of the mounting. This did occur to me, too, as a possibility for a moment, but it can be ruled out on theoretical grounds (basically because the light sources are near enough to infinitely far away, it doesn't matter if light rays get offset one way or the other by a rotation of the shade set relative to the light path).

I have found two other sextant problems over the years that can cause a sudden jump in sextant readings, and here I will jump to the conclusion and tell you that Greg hit the nail right on the head in the very first reply, just a couple of hours after my post! One problem is a loose micrometer drum. The other, a loose horizon mirror frame.

As the Moon rose, I stepped outside and did what I could have done hours earlier if time had permitted: a simple index error sight on the Moon through the trees. And voilà: at that point my index error was over 20 minutes of arc, and that fully explained the earlier error. From a certain perspective, that solved the problem: it was just a change in index error. But an index error on a decent sextant should never jump by such a large amount. This was an Astra IIIB sextant which normally has a very stable index error with changes from one observing session to the next of a few tenths of a minute of arc, if at all, but even a plastic Davis sextant should not show such variability. And just as Greg suggested, the cause of this is a loose screw at the point where the horizon mirror frame attaches to the sextant. To test this, as soon as I suspected this problem, I gave the sextant a good torsional shake about an axis more or less perpendicular to the frame. And I could hear it: a click from the front of the instrument, metal shifting against metal. Though I couldn't localize the sound exactly, the likely culprit was a loose horizon mirror cell. Back into my office, I got out a screwdriver, and sure enough, the screws on the back of the frame were just a little loose, perhaps worked loose from thermal cycles. Once they were tightened, I had to reset the index correction to a near-zero level and remove some "side error" (again, just for convenience, not for sight accuracy), and I was back in business. Here's Greg's photo from the day before yesterday illustrating the mounting screws on the back of the frame: 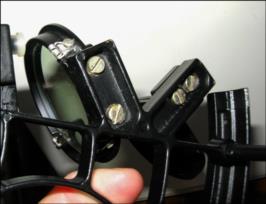 Tightening these screws on a sextant should be a once in five or ten years operation, but it's probably important to know that this problem can and does occur. The angle between the horizon glass and the index mirror must be stable (at any given angle as measured). It's critical to a sextant's operation, and any instability is equivalent to a variable index error. When the horizon glass frame is really loose, the index error can jump by a degree or more, and the instrument is effectively useless.

Just to reiterate, Greg puzzled out the cause right away and also suggested what I considered the next-most likely cause (once other options had been ruled out). He wrote, "Over the years I've had a few issues causing wild intercepts. The worst was a loose horizon mirror frame on a C&P. A loose micrometer drum scale index error adjustment knob caused some havoc on more than one occasion also".

Finally, I mentioned that there was actually a paper trail to go with the smoking gun evidence for the cause of this wild error. Here Ken Gebhart had a clue buried somewhere in his sales files. A couple of years ago, the mirrored surface on my (used, ebay-purchase) Astra IIIB horizon mirror bubbled up and peeled very slightly off the glass. Sights were impossible with a bubbly mirror, so I bought a replacement mirror from Celestaire (Ken). This comes as a complete replacement of the mirror and its mounting cell, so of course I had myself removed the old horizon mirror cell and mounted the new one. Though I am sure I tightened the screws properly, they of course were no longer "factory tight" and, no doubt, the screws have been working themselves loose ever since.

Thanks to everyone for suggesting possible causes of the problem. Just to be clear, I wasn't asking this as a "test" or a "riddle" but really just to collect some data points about how other folks would think through an issue like this. Your replies were all interesting.