I’ve been thinking all day about why we find the instructions on the cardboard covers of old Dalton protractors so puzzling.  How about this as a thesis?

Dalton protractors appear to have been popularised and produced en-masse as a result of the massive build up in aviation in WW2.  They were probably reduced in size from 10” to 5” to make them easier to use within the confines of an aeroplane or because of materials shortages.  With the arrival of Doppler drift and groundspeed and the consequent demise of ‘the air-plot’ followed by the arrival of ‘inertial’ and then ‘GPS’ and the consequent loss of ‘MF beacons’, air navigators have little more to do that draw a line between A and B and measure its length and bearing.  I suspect that since the arrival of GPS

, many coastal sailors do roughly the same.

However, Admiral Douglas was a nineteenth/twentieth century, deep sea, RN seaman promoted Captain in 1915.  He developed his protractor some time after that.  Whilst specialising in surveying and hydrography, where all the qualities of the protractor would have been very useful, he was probably more used to laying off a course from a DR position in the middle of nowhere into the deep grey oceans or a reciprocal compass bearing from a point on the land than many are today.  With this in mind, the instructions are 90% understandable.  E.g. if he wanted to lay off a bearing of 070 from the NE tip of ‘Holy Island’ all he had to do was place the central hole over the nearest meridian and rotate the protractor until 070 on the inner scale was also on the same meridian and to the north (Photo 1).  Then slide the protractor up the meridian until the left hand side was touching the NE tip of ‘Holy Island
’ and draw in the bearing (Photo 2).

What about the remaining 10%?  I can’t explain why there has to be any reference to ‘parallels’, presumably of latitude.  It was perhaps a longstanding mistake.  If you look at the photograph of a recent protractor with a separate instructional sheet which appears here http://www.mwrforum.net/forums/showthread.php?66422-Images-from-past-auctions (It’s a long way down, and you should ignore the description WW2; it’s post 1960s), it appears that ‘meridian or parallel’ has been changed to ‘meridian of longitude’.  I walked past the London Name Plate Manufacturing Co near Kew Bridge last year (a good place for you to visit in April Gary).  I’ll ring them tomorrow to see if they’ll send me a copy of their latest instructions and if they know their history. DaveP 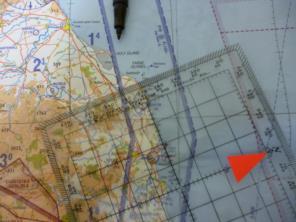 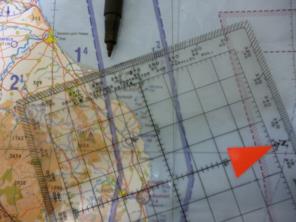