Michael you wrote: ‘I found the instructions less than helpful’. I don’t think I ever knew anybody who actually read the instructions for the Douglas Protractor proving the phrase “If all else fails, read the instructions”. You just used it the way your current instructor liked you to use it. The most valuable advice was: highlight the North arrow so you can find it in poor light, and don’t try and bend it; it won’t! However, most people do the following:

To lay off a track, course from a place, or a bearing from a beacon: Put the centre hole over the start point; ensure the North Arrow points north by aligning one of the vertical lines parallel to the nearest meridian; dot the bearing on the chart with a pencil (Photo1); remove the protractor and use the straight edge of the protractor to rule in the course, track or bearing. (Photo 2)

To measure the bearing of an already drawn in line: Method 1. Holding the protractor with the North Arrow at the top, slide the protractor along the line until the centre hole intercepts a meridian; align the N-S line accurately with the meridian and read off the bearing clockwise on the outside scale. (Photo 3)

Method 2 (to impress younger or less experienced navigators) Align the N-S line of the protractor with the line on the chart to be measured ensuring the North Arrow is in the direction of travel. Slide the protractor along the line to be measured until the centre hole reaches a meridian. Read off the bearing anticlockwise on the inner scale. (Photo4).

N.B. On a Mercator Chart, you can use any meridian. On a Lambert’s Conical Chart, for lines up to a 100miles or so, use a meridian near the middle of the line. For longer than that, use shorter tracks or ask an expert.

The main thing is to use a method you personally feel comfortable with. See also http://fer3.com/arc/m2.aspx/Puzzled-Douglas-Protractor-Instructions-DavidPike-apr-2016-g35213    DaveP 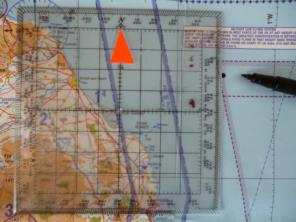 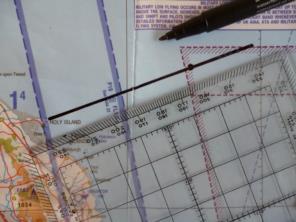 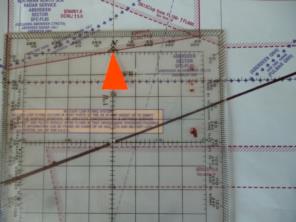 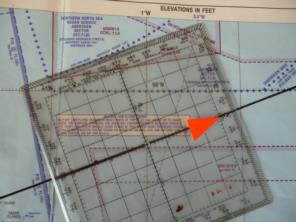