It's not about Pub.249 or any specific method of sight reduction. It's in the nature of the process of celestial navigation itself. The calculations of celestial navigation are performed on the celestial sphere, which is a perfect mathematical set of spherical directions. That's why we can talk about the spherical triangle instead of some hypothetical "spheroidal triangle". The position we find on the celestial sphere is then pulled down, as if via a rope dangling from the heavens, to a point on the Earth using the local gravitational vertical. This gravitational vertical must necessarily include any acceleration in the system, including the Earth's rotation, since there is no physical means to distinguish gravitation from accelerations, even in principle. When we pull our celestial fixes down from the celestial sphere, they automatically include the effect of the Earth's spheroidal shape and also the outward tilt of the local vertical, away from the axis of rotation. In mid-latitudes this combined effect amounts to about twelve minutes of arc. In order to make geodetic measurments of the Earth match up as nearly as possible with astronomical observations for latitude, the definition of latitude on Earth has evolved historically to include this. The latitude coordinate we use does not correspond to a pure mathematical angle at the Earth's center, like the spherical coordinate systems we learn in school. It's displaced so that coordinates on the celestial sphere are as near a match as possible for the coordinates on the terrestrial shere. Even though modern geodetic measurments of terrestrial coordinates, including GPS, could dispense completely with this modified latitude, it's maintained for historical consistency with centuries of earlier latitude measurments. For futurists, note that we do not need to take this form of compensated latitude "with us" when we map other worlds... We might do so, especially on a planet like Mars, but there's no need, no requirement for it.

When we take two or more altitude sights, from a geometric perspective, what we're really doing is determining what star is at the zenith. It's an exceptionally faint star, but that's really what we want: we want to know -- what star is exactly straight up. Another way of saying this is that we are determinging the celestial coordinates of the zenith. In celestial navigation terms, we are, in effect, determining the LHA of Aries (equivalent to sidereal time, which is the RA, or right ascension of the zenith) and we are determing the Declination of the zenith. By definition the Declination of the zenith is equal to the latitude, specifically the astronomical latitude. Becuase of the Earth's slightly oblate shape, flattened at the poles, and its equally oblate gravitational field, that change in latitude does not quite correspond to measured distance on the ground. If you travel from the equator to a point in Oregon at exactly 45° North latitude, the celestial sphere above you has rotated in apparent orientation by exactly 45°, but if you measure it off on the ground, you will discover that the distance traveled is not quite what you would expect in nautical miles. If the Earth and its observable gravitational field were a perfect sphere, then the distance traveled would be 45·60 or 2700 nautical miles exactly. Instead you'll find that the distance from the equator to that line in Oregon labeled 45° is shorter by 12 nautical miles (or is it twice that? --I should double-check). In summary, we don't have to worry about the shift in latitude in celestial navigation due to the spheroidal shape of the Earth because it's already built into the definition of latitude that we use.

The modification of the definition of latitude to account for the oblateness of the Earth and its gravitational field accomodates the lion's share of the difference between the local vertical on the Earth and the pure angles defined at the Earth's center. There are smaller effects due to the local variability of the Earth's gravitational field caused by local concentrations and deficits of mass on the Earth's surface. A big rock has its own gravity and pulls "plumb bobs" and all other measures of the local vertical toward it. If you're sailing near volcanic islands, like Bermuda (which sits atop a very ancient volcano), or if you're sailing over the Mariana's Trench, which is a deep gash in the Earth's physical surface and also its gravitational field, your local vertical is deflected by those mass anomalies by up to two minutes of arc. This error in the local vertical, known to surveyors and geodesists as the "deflection of the vertical" should also be included in celestial navigation. Few methodologies for celestial navigation incorporate this information, primarily because the data required to do it right with useful accuracy only became available (in public, non-classified sources) within the past 25 years, which is after most celestial navigation methods became static, dormant. Just to remind you, my "GPS Anti Spoof" app incorporates this correction with an accuracy of a tenth of a nautical mile in most cases. You take your sight and compare with the display --if it matches, your GPS position is valid, and deflection of the vertical is automatically compensated.

Reminder: get the Android free version, "GPS Anti Spoof", which covers the Sun, Venus, Polaris, Acrux sights (in latest release), here, and get the Android Pro version, which includes the Sun, Moon, all navigational planets and stars and also functions off-network for months at a time here. Or just search in the Google Play store for the phrase "GPS Anti Spoof" from your device. And yes, iPhone/iPad versions are coming out as soon as they clear the Apple submission process. 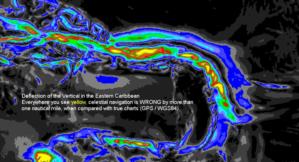