Reply
Re: Pub. 249 question
From: Stan K
Date: 2017 Dec 11, 16:23 -0500
Frank,
I still have not figured out how to run the Python program Murray Peake suggested (Murray - a little help if you can), so I don't know if it accurately duplicates the seven 249 star selections.  We know that Dave Walden's pick3 does not match the 249 3-star selections perfectly.  Your explanation of typos in 249 is making some sense.
BTW, do you think you can have your map made into Christmas ornaments in time for use this year?
Stan

Three weeks ago, Stan asked:
"On what basis are those seven selected?  I'm thinking altitude might be one factor - not too low, not too high.  But that would definitely not be everything."
I started trying to picture the selections graphically in my head. It's a globe of zones; regions of latitude and LHA Aries that are covered by certain sets of stars. I wrote a little app to visualize these zones using the original (government issue) selected stars lists, which I posted previously. Rather than look at the sets of seven, I decided to make a map of the triplets of stars recommended for a fix. The three recommended stars are a subset of the seven on each line in Pub.249 v1. Displayed visually, anomalies in these selections were immediately apparent.
In the image below, the north pole is at the top, south at the bottom, and LHA Aries runs from 0° on the left, through 180° right in the middle, over to 360° on the right. Each color (randomly assigned) represents a region of latitude and LHA Aries covered by one specific set of three recommended stars. For example, the north polar region is covered by a light green region with a tongue extending down as far as 60° toward the right. Anywhere in that region the stars recommended for a three-body fix in Pub.249 v1 are Arcturus, Capella, and Deneb. A good selection. While most of the regions in the map span 20°-30° of latitude and 15°-30° of LHA Aries, there are some odd regions that appear as thin horizontal lines in this map. These are regions covering just one or two degrees of latitude. And even more strange, some of these thin horizontal lines fall right in the middle of other large regions. For example, the three recommended stars for latitude -14° and LHA Aries 195°-210° are Acrux, Rasalhague, and Denebola. But above and below this latitude, for over a dozen degrees north and south, the recommended stars are Acrux, Rasalhague, and Regulus. There's a similar anomaly at latitude -54° circled in the image, and there are a number of others visible that I have not circled. The simplest explanation: these are typos. The "diamond" that indicates the preferred three stars was accidentally copied incorrectly from a row above or below. We're probably looking at errors that have gone undetected for nearly seventy years. Note that these are not "awful" errors or mission-critical errors. It's just a misplaced diamond. The selection of three stars is "OK", but it's inconsistent. Note also in this case where Denebola is swapped for Regulus, there is data for Regulus in that anomalous case. It's just marked wrong.
There's another anomaly visible in this map that reflects a more systematic flaw. A single set of stars covers all values of LHA Aries at the north pole and north of 83° latitude. That makes good sense --when you're near the pole, LHA Aries doesn't matter anymore. But notice that three sets of stars extend to the south pole (three bands of color in the map meet at the pole). This doesn't make sense. Of course, navigation around and over the north pole was a critical function for these tables in the Cold War, while navigation near and over the south pole was an after-thought at best. It's quite possible that no one ever encountered this issue in real world navigation.
I'm mentioning all of this, not because Pub.249 needs to be repaired and brought into some sort of canonical form, rendered more perfect for our adoration :), but really just to remind us that these were manually-edited documents, and some of the choices are erroneous.
Finally, Android users: If you would like to play with the map, tapping on it at random to see what triplet of stars is recommended for each zone of Latitude and LHA Aries, you can download my toy app here: clockwk.com/apps/pub249map.apk. This app does nothing useful. It's just a toy --for your entertainment. You will not be able to select those single-line anomalies unless you have very pointy fingers or a stylus, but you can select the larger regions without much difficulty.
Frank Reed
Clockwork Mapping / ReedNavigation.com
Conanicut Island USA 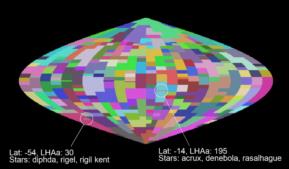