Here's a snip of an article from the Journal of Navigation (US) by Henrietta Swope announcing the release of the first edition of H.O. 249, known today as Pub.249 vol.1 "Selected Stars". Today it gives a line of HC and Zn for seven relatively prominent navigation stars for every degree of LHAaries at every degree of latitude (every two degrees of LHAa at higher latitude). It is a "paper planetarium" for any possible orientation of the celestial sphere. LHAaries is identical to Sidereal Time, and Sidereal Time and Latitude uniquely define the appearance of the sky:

The article's opening line raises a question. Swope writes that "Hutching's Star Tables for Air Navigation, H.O. 249, have now been printed and are ready for distribution". The date of this announcement was June, 1947. OK, so who was Hutching?? I couldn't find anyone named Hutching connected with the tables, but I didn't dig too deep. Anyone know? The remainder of this brief article seeks input on the design of the general computation tables which would become Vols. 2/3 of H.O. 249. At this date it wasn't even obvious how many additional volumes would be required for the full set of tables. When were the first editions of vol.2/3 printed? Were there any changes over the decades. They are permanent in terms of data, but were there are any changes in layout or other details? And when were various other changes made to Vol.1, like the switch from six to seven stars for each line of LHAaries?

As for the author of the article, Henrietta Swope has an interesting life story. She was from a wealthy family. Her parents were residents of the Hull House community in Chicago. Her father was later president of General Electric, or something like that, and she was able to pursue an independent life, which was rare for a woman in her generation, supported by an allowance from the family. She studied mathematics and astronomy and became a "computer" at Harvard. During the war she worked for the Hydrographic Office, and in her own memoirs spoke of the work she did on LORAN tables. She also had some input on Pub.249. After leaving the H.O. in 1947 (only some months after this article), she returned to Harvard and eventually she became a significant astronomer who contributed to the discovery of the Cepheid variable star distance-luminosity relationship. 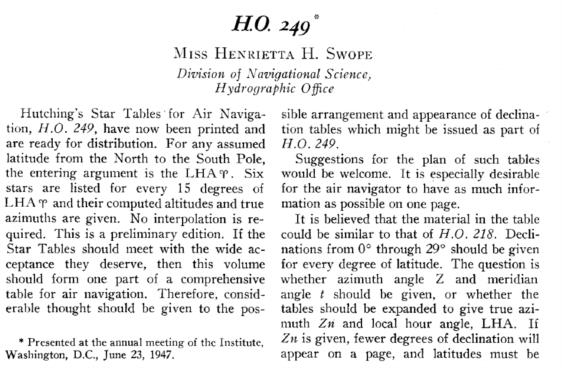