I was thinking about this and I realized there may be at least one case in which using an AP which differs from the DR might have an impact on the plot and thus, the fix. I will grant, however, that this is a very unique case, requiring specific geometry and circumstances, and would likely never be encountered in actual practice. Also, there is a solution for this problem - at least when using Pub. 229. (I'm not sure about the others.) But, I had fun thinking about it.

In fig. 2, everything is the same, except the navigator is using an AP which differs from his DR. The light grey circle is centered on the GP of Star #2 and illustrates that the new AP is the same distance from the GP of Star #2 as the DR, and so the same intercept is obtained. Together with the fact that LOP #1 is in the same position, this proves that he has made no measurement errors. However, his new fix is now a significant distance from the actual position of his vessel. (The fact that the new fix lies almost on the grey circle is just a coincidence of the geometry in this illustration.)

Now, the reason for this discrepancy is obviously the fact that the navigator is approximating circles of position by using straight lines, as is the usual practice. Of course, this is generally not a problem for bodies at low to medium altitudes. They have a GP very far from the vessel's position and so the COP is so large that, at the scale of a normal plot, a section of the COP would appear to be a straight line. But this is not so for bodies at very high altitudes. In those cases, as the distance along the LOP increases away from the point at which the intercept intersects it, the error in [possible] position also increases at a rate sufficient to cause an error at this scale. In fact, the only reason the fix in fig. 1 exactly matched the actual position was the fact that the actual position lies on a line directly between the DR and GP #2 - at the point of intersection with the intercept. That's why I mentioned the navigator's luck in paragraph two.

I mentioned in the first paragraph that Pub. 229 has a solution for this problem. It is called the Table of Offsets. The table allows the navigator to more closely approximate a circle of position by showing how far offset a COP would be from an LOP depending on the distance from the intercept. It can be entered with any altitude between 0° and 89° (with some interpolation), although for low to medium altitudes it seems to me that choosing another AP might be a more sensible course of action. If our navigator had used the Table of Offsets in his plot in fig. 2, he would certainly have arrived at a fix much closer to the actual position of his vessel.

Do other sight reduction methods include similar tables? I do have a copy of 249 vol. 1 and perhaps I'll dig it out to see if it does - but I do not have any other tabular methods on hand to check. 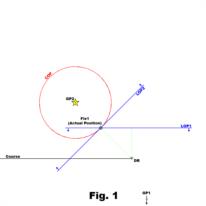 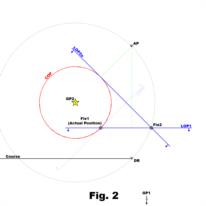