One of the seductive features of Cotter's book is the typsetting. It's very nice, even beautiful, and it feels like a proper math or science book. That's an illusion, of course! But an interesting one. I have watched a number of people trained in physics and mathematics who, upon opening it for the first time and examining just a few pages, are struck (emotionally, sub-consciously) by the technical seriousness of the work. I have no doubt: they are reacting to the typesetting! In modern mathematics, much the same emotional power can be achieved by proper application of LaTeX typesetting standards. Style can influence even the best minds.

That combined symbol of a plus over a tilde is rare, and it's interesting that the publisher managed to produce it. The tilde symbol by itself means "unsigned difference". In modern algebra terms:

or the absolute value of A-B. Like other bits of math we have discussed recently, this is a relic of the pre-algebra era of navigation education. Navigators were instructed to "take the difference" of two numbers, and a "difference" was unsigned, always positive (since for a practitioner without algebra, all numbers are necessarily positive!). The "tilde" notation for a difference was transitional, and it was common only in the first half of the 20th century. Practicing navigators had rules written out in words/text, like "take the difference between latitude and declination". A mathematician's account of that rule would then use the notation Lat~dec.

Clearly the "plus over tilde" notation is just a way of condensing two cases into one formula.

Here's how I described it in a NavList message two years ago:
"The tilde notation in navigation math was created at a time when algebraic signs on numbers were still counted as too alien for mariners. They used rules based on the names of angles, north or south in this case. The meaning of the tilde operation was "subtract the smaller from the larger if of the same name and add if of different names". Today, you can assume algebraic signs are well-known and treat dec and lat as positive if north and negative if south. Then calculate the difference dec-lat always and take the absolute value (meaning, if the result is negative, you drop the sign). 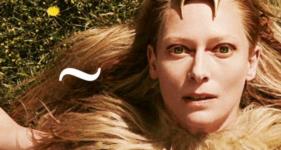 And now... A WARNING: do not be seduced by the dark side! Cotter was no jedi of navigation, no genius of mathematics. There's some good material in that book, and your project is certainly worthwhile. But fixing it up is not merely a matter of inserting some errata notes. Some chapters are just junk, especially the chapter on lunars. Many readers have ended up destroying their understanding of that subject by falling in love with this book.