The tilde notation in navigation math was created at a time when algebraic signs on numbers were still counted as too alien for mariners. They used rules based on the names of angles, north or south in this case. The meaning of the tilde operation was "subtract the smaller from the larger if of the same name and add if of different names". Today, you can assume algebraic signs are well-known and treat dec and lat as positive if north and negative if south. Then calculate the difference dec-lat always and take the absolute value (meaning, if the result is negative, you drop the sign).

While browsing an online copy of "Universal" Sea and Air Navigation tables by Captain Radler de Aquino I came across an example of how to avoid algebraic signs. To 21st century eyes it seems that things were made much more complicated than they really were. Note the bottom of the attached image. Aquino  suggests that the problem can be solved by having two copies copies of his tables - one for same names and one for contrary names. 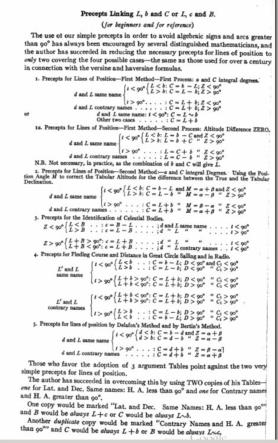