Off and on over the past few years I have been developing Postscript code to produce Bygrave line of position slide rule scales. An earlier version of the code was posted previously http://fer3.com/arc/m2.aspx/Bygrave-Stuart-apr-2011-g16126 and was used to produce Bygrave reproductions http://fer3.com/arc/m2.aspx/MHR1-reproduction-Hasper-mar-2011-g16033 http://fer3.com/arc/m2.aspx/MHR1-reproduction-Morris-apr-2011-g16115 In those versions the rules for the scale ticks were programmed in the Postscript code itself. It became clear that there is enough variability and idiosyncrasies between the original Bygrave, the Höhenrechenschieber MHR1 and modern incarnation in the form of flat Bygraves that this approach is not workable. Instead the new Postscript code I have written requires that the characteristics of each and every tick on the scale be specified either by reading the data from an external file or embedding it in the Postscript code itself. The required data can be easily generated by a high level computer language or perhaps a spreadsheet. Embedding the scale data in the Postscript creates a self-contained file that could be sent directly to a Postscript printer if such things still exist. For development and tweaking I find it faster and more convenient to read the data from an external file. This works fine on my Windows XP computer but so far I haven’t been able to get it to work under Windows 8.1. Something to do with access permissions I guess. Any suggestions?

I attach a document explaining how to run the code, some examples of the output that is possible and a zip file containing the code needed to produce them.

I believe that the code could be used to produce a practical modern Bygrave for actual sight reductions. This would probably require plastic tubes to be ground to precise diameters but to date I have not located a facility to do this. I appears to be relatively straightforward to produce the end caps, locking knobs and other fittings by 3D printing. 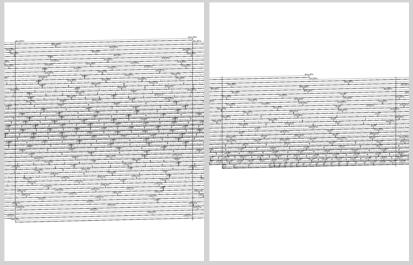 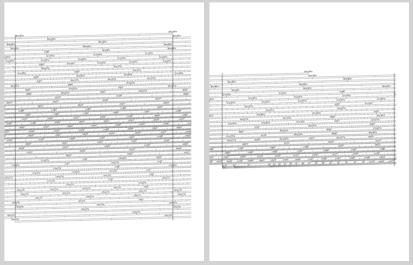