Don, you wrote:
"Then I looked up the height of the radio antenna on the Empire State Building (about 200') and compared it to the diameter of the sun. A little math gave me a distance of about 45,000 feet to the viewing site. I opened Google Earth, and was disappointed to find that Eagle Rock was too far away."

I did the same thing with the "step" in the profile of the ESB and got a distance of about 38,000 feet +/-10%. And then of course reversing the bearing of the rising Sun, as you did, led me out into the Meadowlands. My first guess was something called the "Meadowlands Environment Center" since they appear to have an observatory, and I thought they might have scheduled a dawn eclipse party, but that didn't work out. There are foreground features that could not be seen from there. We need somewhat higher ground...

You continued:
"Next I looked up the azimuth of the rising sun, about 110 deg. I measured back 45000' along a 290 deg bearing, and looked for a likely open area nearby. Holy Cross Cemetery looked promising, and was the kind of place where someone might have easy access at dawn. I googled a few images that showed it had a clear line of sight to mid town Manhattan from rising ground."

Wow. You got very close without using more clues. There are some foreground features that really narrow things down dramatically. Did you notice the high tension power line tower lined up with a church steeple just below the right horn of the eclipsed sun? And towards the left, just visible in the dark part of the image, there's a bridge structure of some sort with a little red light at the top. It turns out that this bridge has a nice utilitarian New Jersey name: it's the "Upper Hack Lift Bridge" (an NJ Transit railroad bridge crossing the Hackensack River) and the power line tower visible in the photo is located just to the southeast of the bridge. The church is apparently St. Joseph's in Union City, NJ, so we're really seeing two skylines superimposed. Since the railroad bridge is about 1.7 n.m. away and the church steeple about 4.1 miles away and the Empire State Building is about 6.7 n.m. away, relatively small changes in the estimated position of the photographer would shift their apparent overlap in the image substantially. If you move twenty feet, the position of the foreground features (bridge and tower) would shift by 3 minutes of arc relative to the mid-ground (church steeple) and 5 minutes of arc relative to the background (Manhattan skyline). And of course, with Google Street View and the linked 'Panoramio' images nearby, it's not difficult to find close matches. That put my best guess right at the entrance to the "James Zadroga Memorial Soccer Field" right across the street from the cemetery. Twenty feet north or south of there would not match. Narrowing the position along the perpendicular direction is tougher, but since the terrain slopes up to the west rather sharply here, if the photographer was, in fact, across the street in the cemetery, he could not be very far up the hill. Certainly no more than a hundred feet west of here. I'm attaching an image taken from very near my guess for the photographer's location with the original eclipse photo's frame outlined and an ellipse drawn in to represent the rising sun.

Finally, I used one other position-finding method. I emailed the photographer and said, "excuse me, sir, if you would kindly tell me the location where you took this photo, I will give you this very fine and valuable barometer."
:)

PS: For those who don't recognize it, there's an old physics joke in which an exam question asks how to determine the height of a building using a barometer. There are, of course, lots of ways, including the one that the exam-writer is looking for (using the change in air pressure from ground level to rooftop). For example, you could throw the barometer off the roof and time how long it takes to hit the ground and smash to pieces. It's good sport coming up with answers that defy the exam-writer's intentions and with any luck end up destroying the barometer or otherwise ignoring its main function. But the most entertaining answer is "you pay a visit to the building manager and say 'excuse me, sir, if you would kindly tell me the height of this building, I will give you this very fine and valuable barometer.'" 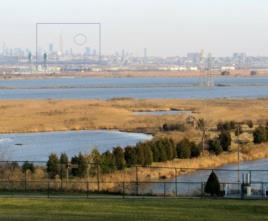