Tonight was nice and clear, and there was a high, bright pass of the ISS (International Space Station), so I decided to determine my position by a purely visual observation. The attached diagram shows the expected track of the ISS across Cassiopeia for latitudes of 41.25°N and 41.75°N for a fixed longitude of -71.368°. The trick to these observations is to wait for the satellite to cross a connecting line between two easily identified, relatively bright stars. By simple unaided "naked eye" observation, I estimated that the ISS crossed the line between delta and gamma Cas approximately 20-25% of the distance between them, closer to gamma. By simple interpolation, I get a latitude of about 41.505° with an uncertainty of approximately +/- 0.75 nautical miles. And indeed, I was about 0.75 n.m. south of that latitude at the time of observation.

Longitude, in principle is determined at the same time. The real uncertainty is "along-track". The timing of the observation must be quite exact to get a fix that is accurate in both latitude and longitude. If not, then we end up with a long narrow error ellipse (equivalent to a short line of position) aligned parallel to the satellite's ground track. And since the satellite's ground speed is around 5 miles per second, the length of that error ellipse in miles will be the uncertainty in the timing in seconds multiplied by 5. In addition, for many other satellites (rarely the ISS), there is some equivalent uncertainty due to a cumulative error in the satellite's longitude in its orbit. This is nearly identical to a timing error in the observation so this uncertainty, also, stretches out the error ellipse along-track.

We should all be doing this sort of observation for navigation. It's fast and simple and requires no horizon, no instruments. The downside, of course, is that it requires satellite orbital elements (a few kilobytes of data) downloaded within the past few days. In many circumstances, this is now possible and relatively inexpensive even at sea or in remote areas. A clever app on a smartphone with a good low-light camera and access to accurate time could improve accuracy in both dimensions by a factor of ten, but that's a story for another day. Try it by visual observation. How close can you get?

The attached image was generated at heavens-above.com. Pick a location, and generate a prediction sky cart. Then click on the chart to zoom in. There are tricks to merging the views for different latitudes, but you can get by just comparing a pair of images.

Frank Reed
PS: gamma Cas is also known as "Navi". That was a prank name from the Apollo program. Most of you probably know the story, but for those who don't, here's a copy of an article from Sky & Telescope in 1994 detailing it all. 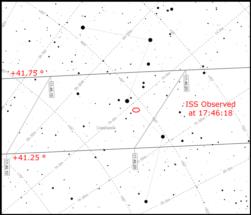