I suspect you are the victim of a "bit flip" error. You almost certainly have known in years past that the entry variable in the almanac should be UT1. It actually says that right in the Nautical Almanac (and other resources). The cap below is from the 1994 edition, which is the only recent one I have with easy digital access, but I don't think this portion of the text has been changed.

So what caused that bit flip which erased this bit of technical trivia? Most likely a high-energy cosmic ray. I'll go with a lepton, maybe a big fat muon, since they know you're out to get them! Some ultra-high energy atomic nucleus rocketed through the Solar System, plunged at almost exactly the speed of light through the Earth's atmosphere generating a cascade of secondaries, and one of those secondaries, a muon, spotted you in your armchair and targeted the "UT1" memory in your brain depositing enough energy to light up one neuron. And just like that: bit flip!  :)

By the way, if anyone is contemplating writing any software, apps, spreadsheets, etc. that provide relatively high-accuracy celestial navigation data, values of DUT (the difference between UT1 and UTC have to be provided and updated somehow. Good, reliable predictions are available from IERS here (see Bulletin A and scroll down to predictions). Traditionally (as in five years ago!) we would have arranged these updates by downloading a small file once every three to six months perhaps. In the modern world of apps on smartphones and tablets, it's just as easy to include the updated DUT values hardcoded into normal app updates every few months. That's included in my "GPS Anti Spoof" app updates at least every six months, and the app ecosystem takes care of the update automatically for most users. 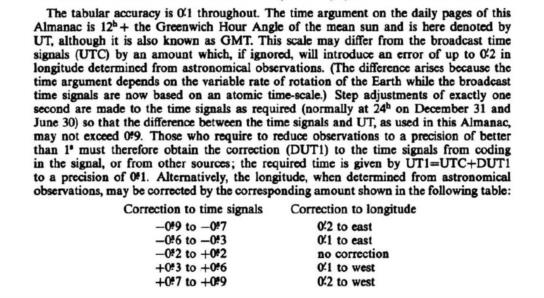