John you wrote:  One volume of HO229 is for latitudes 0-45 degrees and the other is for latitudes 46-90. If we were on a training mission where we knew that we would not be going north of 45, we only carried one. For operational missions (airborne alert), we carried both.

Like Gary and Frank, I suspect you were using HO249/AP3270 the format of which was agreed between the USAF, RAF, and RCAF in April 1950.  The changeover between Vol 2 and Vol 3 was Latitude 39/40 degrees not 45 degrees.  I don’t know why, but 40N gets all of Canada and most of Northern Europe into one volume.  You mentioned weight.  Why not keep all three volumes in the aircraft?  This has no effect on take-off weight, reduces distribution costs, and certainly reduces the weight of your nav-bag.  In the Vulcan, and probably many other RAF aircraft, the Nav-Plotter’s table lifted up like a school desk to reveal space below for Vols 1,2, and 3.  If you wished to pre-compute before flight, there were always a few sets available in the Flight Planning Room.  As seen in the attached photograph, Vol 3 got most use, and the one in the photo has clearly seen a lot of service.  I’ve got pristine copies from eBay, but I prefer to use my dog-eared Vol 3, so that at the same time I can fondly remember all the guys who must have thumbed through its pages.  All Navigators were issued with their own 6th monthly copy of the Air Almanac, but this was smaller and lighter.  DaveP 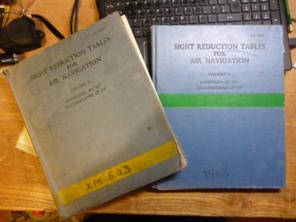