In reviewing the Polhemus manual (pdf attached), I have to say I'm confused about where the Coriolis Correction is applied. The manual example shows it applied to precomputed Hc's. But the manual also shows it applied again when the fix is plotted.  Why both places. It seems appropriate to apply it to one or the other but not both. This is my confusion. Where to apply the correction.

On the Polhemus computation form example, Coriolis has been accounted for on the form’s left, line 9, Figure 11A . Line 22 show's it is part of the other corrections that are applied to Ha giving Hc (lines 4, 23 and 24 on the form’s right ). The Coriolis correction value is based on the relative Zn-Track and the plane's latitude. In the North hemisphere, it's correction sign is - when applied to Hc if the body was to the right of the track and + if body is left.  At this point, it seems that Coriolis corrections have been accounted for.

WHY is the Coriolis Correction applied again, highlight on plot template?  Isn't it enough to apply the correction each sight's Hc before the LOPs are plotted   OR   to shift the FIX  by the total effect but not both? 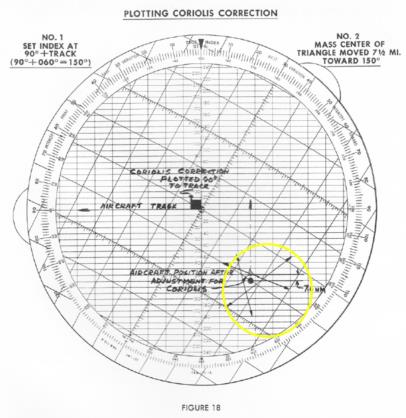 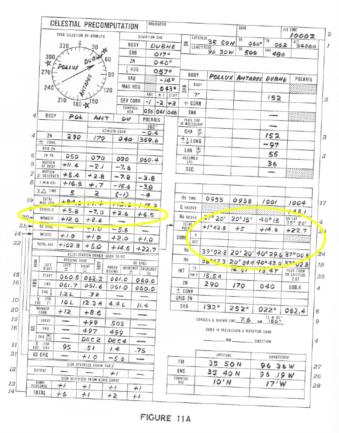