You wrote :” I do not wish to make a mountain out of a molehill. All three points are within 4' of arc, or just under 2 nautical miles from Point 1 to Point 3, with Point 2 roughly in the middle.  At most, we shift the location of Camp Wild 1' of arc east or west, with a variation in time of 4 seconds.  That's not really worth disputing.”

Agreed! For the purposes of analysing Worsley’s log this question is neither here nor there and and I admit to losing most of my interest in it when in a previous post I noted “Worsley’s position for it [Cape Belsham] is 2.8 nautical miles from the modern position”.

I am questioning the correctness of labels on modern Marine Charts and I have changed the thread name accordingly.

Although I contend that the 3 promontories in question are unambiguously identifiable and labelled in each of the 4 charts/maps that I previously attached let’s just focus on the large scale ones; Chart 29104 and the one from the Joint Services Expedition . I have reattached cropped versions of the area in question. Further since Cape Belsham is the result of somebody’s arbitrary decision let’s exclude it for the moment and focus on Point Wild. This was the site of real historic events and exists in its own objective reality. The fact that so many of us many of us have been engrossed in this shows that it matters.

As laid out in my earlier post there is a monument on Point Wild and photographs of the area compared to the views from Google Earth (also reattached) suggest that it is on the eastern promontory. The aerial view from Google Earth also shows that the middle promontory is very steep and is an unlikely place for Shackleton’s Wild Camp. The eastern promontory is much flatter and snow free.

“A point 6 mi W of Cape Valentine on the N coast of Elephant Island, South Shetland Islands. Named Cape Wild by the Shackleton Endurance expedition 1914-16, but Point Wild is recommended for this feature because of its small size and to avoid confusion with Cape Wild on George V Coast. Named for Frank Wild, leader of the party from Shackleton's shipwrecked expedition which camped on the point for four months until rescued in August 1916.”

Note in particular that Point Wild is described as a “small feature”. That fits the eastern promontory but is a stretch for the middle for one.

So if we find Point Wild we find Cape Belsham or at least its modern designation.

The USGS gives the following coordinates:

I have plotted these locations with Google Earth (attached) and you can see they don’t really pin the locations down. What’s a poor chart maker to do? If these data were the source for the labels in Chart 29104 they could easily have been misplaced especially given that Point Wild is such a small feature.

Maybe but the recent data is more likely to be updates to be limited to satellite and sounding data and is unlikely to involve re-examining the historical labelling of feature labels. 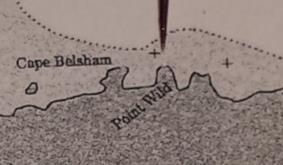 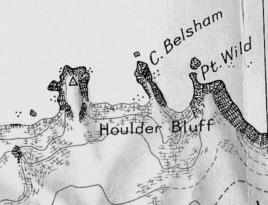 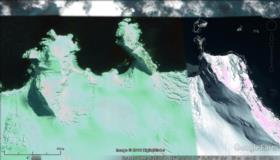 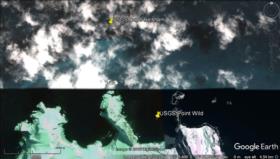