Is that a sextant? If yes, which make/brand? Where to learn more about it?

I was too lazy to get my A10s out last night to check, but it appears there were at least two companies producing them for the US AAC, Fairchild and Agfa.  The one you asked about is an A10, but it’s not quite the same as my A10 and A10A.  In my photo, the A10 is on the right and the A10A is on the left.  The A10 had a navigator decided pecker, and the A10A had an automatic pecker, which statistically should have coped better at allowing for rate of change of acceleration.  I.e. the bubble seems steadier at maximum acceleration than when it slices though zero acceleration, which rather confuses most humans.

You’ll note that the A10 you show has a different bubble chamber to my A10, but it’s the same as the one on my A10A.  It doesn’t have the x2? telescope like mine and the index knob is metal not plastic.  My A10A is by Fairchild.  The plate on my A10 is too corroded to see, but it’s the same layout as a Fairchild plate.  The Agfa A10 shown here https://www.worthpoint.com/worthopedia/s-army-air-corps-sextant-125-10-1822331346 looks more like the one you’re trying to identify. You’ll find one of the best accounts of on US WW2 Air Sextant manufacture here http://www.artefactsconsortium.org/Publications/PDFfiles/Vol5Mil/5.07.Military-Warner,SextantsGr75ppiFFFWEBF%20-%20Copy.pdf .  Don’t ask me how well they work.  Both of mine are seized up.  DaveP 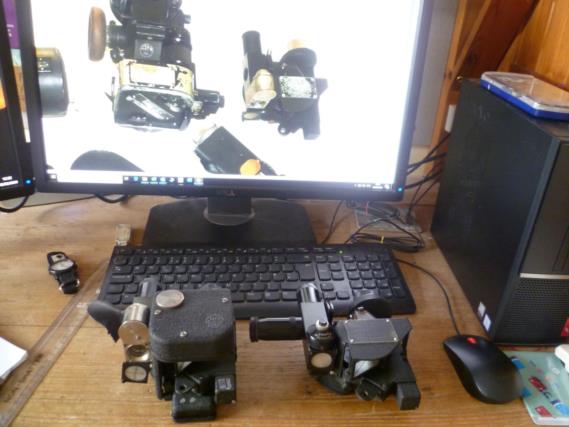