A couple of oops! From me I’m afraid.  I completely missed the capital letters.  I read it as ‘celestial tools’.  I realise now that ‘Celestial Tools’ must be a computer programme.  I also forgot that not everyone is into bubble and pendulous reference sextants, which allow you to shoot all night if you need to and you’re on a steady enough platform.  We never used planispheres like 2102D although I believe the RAF did have a similar item in earlier years.  For us, the sky diagrams in the Air Almanac were close enough.
To return to the problem, using the Marc St Hilaire method, if you draw azimuth lines from an assumed position, and then use your Douglas protractor to draw the intercepts position lines at 90 degrees, you get an oddly shaped quadrilateral with not necessarily equal sides, but with a pair of 90 degree opposite angles (see diagram) .
Then, using the fact that the angles of a plane triangle and also the angles on a straight line add up to 180 degrees, its easy to see what you intuitively felt already that
c = 180 – ((90 – a) + (90 – b)) 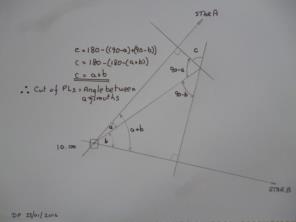