Antoine, you wrote:
"to the best of my memory the highest values for light-time corrections occur for the Planets who show the highest speeds relative to the Earth."

Yes. It's the actual relative speed (e.g. in km/sec) that should matter. And this applies also to objects at considerable distance. Otherwise, the effect "tops out" since the light delay is directly proportional to distance, and the distance travelled by the object is directly proportional to the delay time --which implies that the angular shift across the line of sight is the same for two bodies with identical speeds across the line of sight, regardless of distance.

By the way, just to emphasize, this calculation is a standard element in the ephemerides, and if you have, let's say, geocentric eccliptic coordinates of the planets from some source, it's included already --and you don't have to worry about it-- unless someone has gone out of their way to make their tables exotic. The delay is normal and required in geocentric coordinates.

The universe we observe exists on (or within) the "backward light cone" of our present existence. It doesn't matter what's "really happening" on Jupiter right now. If we can't see it until thirty minutes later, then it doesn't exist to us in any physical way until then. Every influence we can detect travels at the speed of light or slower, and "on or within the backward light cone" is just a fancy-physics way of saying that. 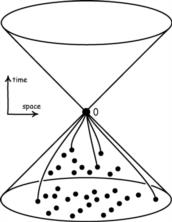