It's built right into the almanac ephemerides and software apps also correct for it. Consider the case of Mars around July 27, 2018. Mars is going to be impressive this year because opposition occurs very close to the planet's perihelion in its orbit.

Remember August of 2003? Mars was ever so slightly closer than it had been to the Earth in all of recorded history (and then some!). And those of us doing astronomy outreach back then had to tell people that it wouldn't even be nearly as good as it was then until 15 long years later. Well those 13 long years are nearly over, and this summer Mars is going to be a brilliant beacon in the midnight sky and a beautiful sight through a backyard telescope. It will also be zipping along rather quickly on the celestial sphere, and that's why it's relevant here. Its position will be changing quickly so light delay comes into play.

In the attached images, we see data on Mars for the night of opposition from the Stellarium desktop app. The Full Moon will be right above Mars. Note that there is an option to "Simulate light speed", which is the default. That's a rather odd way of saying it, but I assume they have done the math right. I didn't double-check. When this default option is selected the azimuth of Mars at this time, for my location, is 180°00'07" while its altitude is 22°57'45". If we turn off the light delay (hard to see why this is an option at all!), then the azimuth is 179°59'48" and the altitude is 22°57'50". The total change in position is just about 0.3 minutes of arc. That's certainly within the range of things that we worry about in celestial navigation, so, yes, it's good that it's counted. And by the way, that seems somewhat too large --by a factor of four or so?-- so maybe that's not what Stellarium is doing...

Note that if we were navigating "in the time domain", by detecting signals from Mars or watching timed events near it like occultations of its moons, then this would be a much bigger problem. The light travel time on this date is about three and a half minutes. 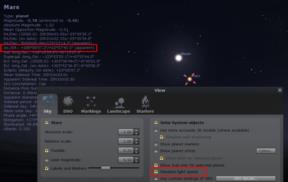 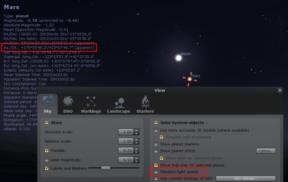