I wrote yesterday:
"No other tables are necessary (though they're convenient). The tabulated lunar distances which were included in the almanacs into the early 20th century --already over 50 years after they had become obsolete at sea-- can be re-calculated without much trouble. It's just the angular distance between the Moon's center and the other body's center. "

And just a reminder, I have made predicted lunar distance tables avaiable online for over a decade --as a "convenience" for analyzing lunars but, just to emphasize, not a necessity. These are functionally identical to the ones formerly published in the almanacs, but they support many options. You can choose whether to include the navigational planets or also the stars. Or you can limit your tables to the traditional "Sun+nine lunars stars" as in the original Nautical Almanac. You can display the predicted angles in degrees and decimal minutes, or minutes and seconds, or decimal degrees. And you can choose to list only those lunar distances that are relevant to you as well. As an option extremely useful for historical analysis of lunars (as well as historical re-creation, if that interests you), it's possible to list the distances in terms of Greenwich Apparent Time instead of GMT. GAT, identical to exact "sundial time" at Greenwich, was the almanac standard time for the first two-thirds of a century of its existence.

Attached here are two sample outputs from my online lunar tables, displaying some of the options available. To generate your own tables, visit my website here: http://www.reednavigation.com/lunars/. 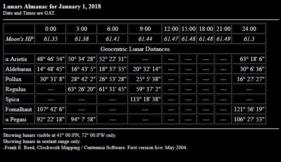 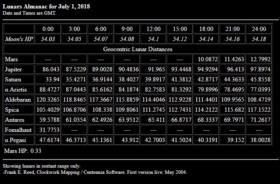