Speaking of Hamal lunars, I shot some this past Thursday while on vacation in Florida. I also shot some Mars lunars. This was my first experience shooting lunars from a moving platform, although I wasn't on a boat. I was standing on a small floating dock in a canal which was being gently rocked by some waves. (I found out a short time later that the waves were being caused by some dolphins playing around in the canal.) My approximate location was: 28° 20.46' N, 82° 42.46' W; height of eye: ~7ft. The Moon was about 83% illuminated. I used overlapping images of the Moon and a couple of stars to determine index error.

As you will see from my notes (attached), the Mars lunars turned out quite well. The Hamal lunars...not so much. I think this is due to the way I was shooting them. I always turn the micrometer drum in the same direction, such that the measurement is increasing. Since the Hamal lunars were far limb, that means I was 'moving' the star from the interior of the Moon towards the limb. I was using a shade for the Moon, but I think the contrast between the two bodies was still not good enough for me to precisely discern the moment of tangency. Either that, or I just need to practice bringing the body 'up' to the 'horizon'. 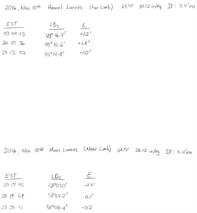