Reply
Re: The Orion North Arrow
From: Brad Morris
Date: 2017 Feb 12, 20:47 -0500
David
I have only been peripherally following this discussion.  Imaginary patterns in the sky and using your thumb do not, in general, appeal to me.
And yet when Frank replied to your post with the "giant hand" image, I had to look at your image.  After a moment, or two, I believe I grasped the "your thumb points north" point that Frank has been making.  Your image did it for me, giant hand and all. Thank you!  It suddenly dawned on me what Frank has been at.  Maybe not in all of its glory, with all of the associated  minutia, but certainly the basics.  Frank's discussion of the genome certainly helped too, I just still wasn't making the leap to how the thumb portion worked.  Mission accomplished.
Brad
PS On a completely different note, the fact that I never see those imaginary patterns in the sky may be the reason I am not offended by the distortion injected by the 2102.  I don't see the patterns up there, and therefore, not bothered that they are distorted down here.  The tool, for me, has been a way to get a numerical set of azimuths and elevations, not to learn the night sky.
On Feb 12, 2017 6:45 PM, "David Pike" <NoReply_DavidPike@fer3.com> wrote:

Frank you wrote: Yikes. You have confused yourself mightily!

Thanks Frank.  I saw most of that the first time.  I just wasn’t sure what to do between noting the direction of my thumb and finding a north point on my horizon.  I tried to go over the top of the celestial sphere to the horizon behind me.  Substituting a card is easier to understand.  Just look horizontally along the card (See diagram).  This does beg the question; the card probably won’t be vertical, except at merpas, so how should you look along the card to find a point on the horizon?  Should you follow the slant of the card or go straight down, but therein lies the path to madness, so let’s not go there.

I have actually steered by Polaris (at least I hope it was Polaris).  My first ever night passage in TIKI motor sailing up the coast between Spurn and Whitby, the light failed in my compass.  I found that if I kept Polaris just off my starboard spreader, I got the course I wanted without spoiling my night vision by shining my torch at the compass every few minutes.  DaveP 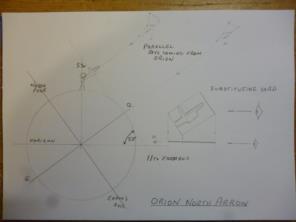