David P, you wrote:
"This does beg the question; the card probably won’t be vertical, except at merpas, so how should you look along the card to find a point on the horizon?  Should you follow the slant of the card or go straight down, but therein lies the path to madness, so let’s not go there."

Well, remember that it's the short edge of the card in your diagram that is identical to a sundial's gnomon. The plane of the card doesn't help you. You want to sight up that back edge of the card. Or you want to look down on that edge of the card from directly above to see the azimuth line. You could implement this more visually in the index card construction by finding a drinking straw and cutting a segment to attach to that edge of the card. Now you can look right through it if you want. I'm not suggesting that this is how the Orion North Arrow should be normally used, but rather this visualization may help you to see how it is used in its plain "manual" form.

You'll notice that when Orion is either rising or setting, the thumb direction then stands out visually against the horizon, and you can "read" the latitude from the sky. This is a variant of the Orion "tilt" trick that was apparently being portrayed in the recent Disney movie Moana. This also makes it easy to visualize the appearance of Orion rising or setting in different parts of the world. Once you know that the arrow's tilt is your latitude, you can immediately picture Orion rising at the equator, for example. This is no great science; anyone with a planetarium app or equivalent can learn the same visualization, but it's a snap to teach it when you have the Orion North Arrow.

I love the giant hand in your diagram! I had to blow it up... reproduced below. 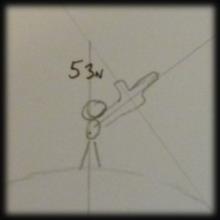