I’m afraid I’ve changed my mind yet again.  I now believe the usefulness of the Orion Arrow for field navigation diminishes the further north you happen to be.  I was going to paint a perfectly good globe matt white and draw on it to prove it, but decided to try to draw the situation in a two view drawing instead (see below).  To keep things simple, forget the eight degree misalignment and assume Mintaka has declination zero.

So yes the Arrow always points to the North Pole, but its usefulness for navigation in the field at night diminishes the further north you happen to be.  DaveP 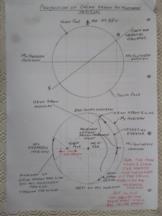