The article is interesting as an example of a retired scientist fulfilling his hypothesis with marginal evidence, but not necessarily a story about actual history. I would worry about confirmation bias.

There are significant elements of real history in Delano's story. The basic scenario about small farms that covered the landscape of de-forested New England from the early 19th into the early 20th century is true. The amazing number of stone walls in the woods of New England is legendary. And the lush, verdant re-growth of the forests in the 20th century provides an extraordinary example of Nature restored with the passage of time, at least superficially.

But look at a map of New England towns. You'll find a tremendous variety of orientations. Most of these boundaries were carefully surveyed by ground survey work running in from the previously established colonial, and later state, boundaries. It's no surprise that the property lot boundaries are often parallel to the primary boundaries of each town, with exceptions for extreme geographic features like bluffs and steep ravines. Have a look at the attached map below showing New England town boundaries (note that New England has a unique and highly democratic local government structure that depends in part on the fact that the town polygons are relatively uniform and form a complete coverage of the land of the individual states (some details in the Wikipedia article on New England Towns). The boundaries show great variety in orientation. The hypothesis in the article that these were surveyed by magnetic compass is unsupported and, almost certainly, only occasionally the case. Even if magnetic orientations were occasionally used, this does not imply that the boundary lines would have been aligned parallel to the cardinal directions. Could a surveyor in 1750 not draw a line on the map 12° east of true north-south, for example? Or 12° east of magnetic north-south, for that matter?

Astronomical surveying techniques were well-established in the 18th century. While longitude was still problematic well into the 19th century, latitude and true compass bearing were readily acquired with high accuracy. You need an east-west or north-south line? Then you note the azimuths of sunrise and sunset, or more accurately the azimuths of some low, pre-determined altitude observed with a sextant or similar instrument off a mercury artificial horizon. Split the difference in direction, and you have a nearly perfect true north-south line. All other compass directions follow by simple geometry. And yes, they knew how to correct for changing Sun declination during the day (in New England near an equinox, you split the sunrise/sunset azimuths and then shift the bisector west by 8 minutes of arc near the autumn equinox, or shift it east the same amount near the spring equinox). This was well-established procedure.

How then can one explain the specific orientation of any particular town boundary (and the lot boundaries and stone wall orientations which follow from it) in New England? The only real answer is hard, tedious work: go digging in the primary source historical archives. In rare cases, the original field notes and directions for survey work may still exist in the legal records in New England towns. In other cases there are references in newspaper articles (and given New England's very high literacy rates in this period --right??-- there were vast numbers of small town newspapers operating from the 18th century onward). I have seen such references. But in many cases we have to face the fact that the most fundamental town boundaries were laid down early in New England's history and often unrecorded or listed in records that are now almost impossible to find (some sent back to England in the colonial period, for example). And sometimes the boundaries were simple fiduciary lines dependent on features in the landscape which may no longer exist, e.g. "a straight line running northeasterly from the southernmost end of the spit of land in the bay known as Pemaquid Point to the great boulder atop Smith's Hill". Once a baseline like this was established, all other boundaries would radiate outward in geometric perfection until they ran into the next area of survey work where some sort of compromise would be reached for a line of separation. Surveys like this were always recorded with exacting measurements on the ground so that they could be legally reproduced at a later date.

The concluding line in the article, "Data from these stone walls strengthen the current geophysical model about the Earth’s magnetic field" strikes me as a major case of wishful thinking. The data do not support this conclusion. 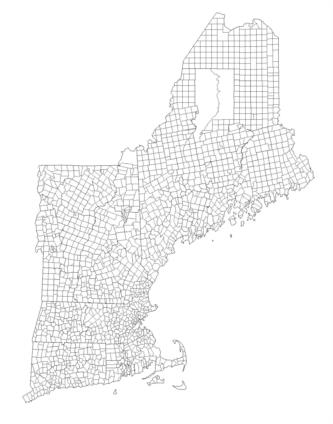