Though not directly related to traditional navigation, historic aircraft are popular among NavList members, so I thought it would be worth posting on this.

Three weeks ago, while standing at the beach at Mackerel Cove here on Conanicut Island, a loud four-engined aircraft approached at low altitude from the north. There are C-130J Super Hercules that fly out of Quonset on training flights, so at first this did not seem unusual. But as it approached, I recognized the distinctive tail fin and chin turret identifying this as a Second World War era B-17G. A beautiful sight just 500-800 feet high a bit to the east of us, nicely illuminated in the late afternoon sun. I looked it up, posted about it on Facebook, etc. The aircraft was owned by the Collings Foundation of Massachusetts and frequently took passengers, about a dozen at a time, on "experience" flights lasting half an hour or so for $450 per person.

This specific B-17, known by the last three digits of its tail number as the "909", itself came off the assembly line too late in 1945 to see service in the war. It was later flown as a drone during atomic bomb tests. It was retired to a boneyard in the desert until the radiation levels tailed off. Later it flew as a fire bomber, and then it was restored as a flying museum-piece. Apparently it went off the end of a runway in the 1980s and had to be restored with significant components from another B-17.

This morning this aircraft crashed and burned at Bradley Airport north of Hartford, Connecticut. According to eyewitness reports, the inboard left-wing engine failed and caught fire shortly after take-off. The pilot turned around and returned to the airport for an emergency landing. Apparently they lost control and crashed (speed about 50mph) into a building that housed de-icing gear. The aircraft was completely destroyed except the tail and the outer portion of the left wing. This plane presumably had two crew and 10-12 passengers. Six injured people were transported to hospitals, some reportedly with terrible burns, and at least five people were killed. Very tragic. 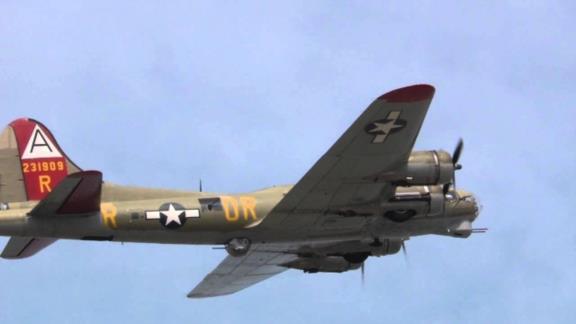 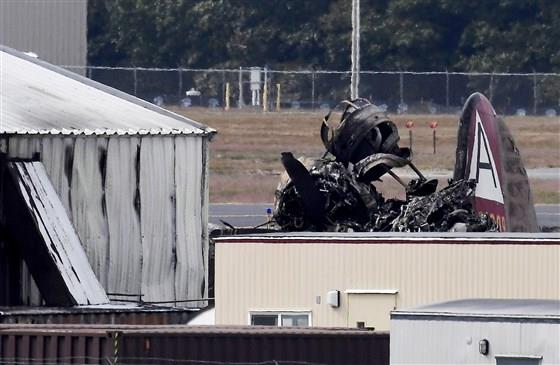 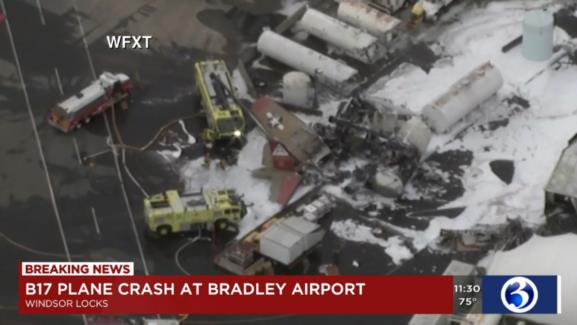