Peter Monta, you wrote:
"I think they should up their game and start working on names for each of the 1.1e9 stars in the Gaia catalog released yesterday."

A billion names for heavenly bodies?? Careful... That's within an order of magnitude of the number that may precipitate the end of the universe. O, Gaia, spare us from Apocalyptic Giganomy!! (somebody had to say it... you know we were all thinking it...)

PS: And then there are the Monks of Dschubba, as portrayed below: a sect of Tibetan monks in the 31st century seeking god with radio telescopes, described in an episode of "Futurama" and surely a play on the "nine billion names of god". And what is Dschubba? Of course, it is a traditional star name which was made official less than three weeks ago by the IAU. And thus we loop. 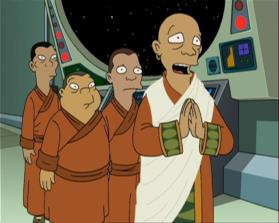