There are a couple of illusions at work here. First, the stars are not seen "in" the atmosphere, and then, after they cross that glowing green line, "out" of the atmosphere. At every point where the stars are visible in images like this, their light is passing through air that is exceedingly thin, a near perfect vacuum by sea level standards. It's "near space" as they say. And nothing happens that's unusual in terms of the atmospheric density as we pass through that green glow.

The Earth's atmospheric density is well approximated by an exponential decay with altitude. This is usually modelled with a variable scale height or e-folding height, but you can get very good results using a fixed e-folding height of about 6.7km from tropopause (about 11km high) to 135km and then switch to an e-folding height of 45km for the remainder of the thermosphere up to 1000km altitude above sea level. Ignoring the higher altitude ultra-thin portion:
d(h) = d0·exp(-h/6.7) for 11km<h<135km.
This can be re-expressed with a different base... Ten is nice!
d(h) = d0·10-h/15.4 for 11km<h<135km,
or in words, the density falls by a factor of 10 for every 15.4km of altitude above sea level from the lower edge of the stratosphere up into the lower thermosphere

So how high up are the stars when we see them in this image? What level of atmosphere are they passing through (at the lowest point of each light ray's journey through the high atmosphere)? It's important to understand the green airglow or skyglow here. It creates this odd appearance of a "lid" on the upper atmosphere. It's similar to the aurorae, but it's always present. The light is generated by oxygen atoms. It's almost undetectable by visual observation from the ground, and I'm not sure if anyone besides an expert observer would recognize it as distinct from the aurorae as seen from sea level. But from above, it's quite prominent, and it often looks like a ring around the Earth on the night side. The airglow occurs at a relatively fixed altitude around 90-100km high in the lower thermosphere. It's a near vacuum there. Satellites can barely orbit here. A very dense object, like a bowling ball in low orbit could survive for one or two orbits at this altitude, but it's a hard vacuum by any other measure. Using the approximate expression above, we can estimate the atmospheric density above and below the airglow layer (note: there is no change at the airglow level in terms of the density structure... it's falling exponentially from well below this altitude to well above this altitude). This is easy to do if we stick to multiples of the scale height, especially in the 10-based version. At 77km altitude (which is five times the scale height, 15.4), the density is about 75,000x lower than air density at sea level. Climb another 15.4km to 92.4km altitude, it's 10x lower again so 750,000 times less than sea level, and another 15.4km to 108km altitude lowers the density to 7.5 million times smaller than that at sea level. All of these qualify as a hard vacuum, and densities like that, even integrated over a path skimming through the upper atmosphere, are utterly incapable of refracting or aborbing light to any significant extent. The atmosphere simply isn't involved... because this is effectively space for any practical concern (except orbital flight... even those densities are enough to cause orbit decay in less than a day).

So what's going on then?! In some of these videos, it's strictly a visual illusion. The stars appear brighter with a background, and then perceptually they may look fainter higher up. But in other videos from the space station, like this one that you have linked, the effect is clearly visible in the video. I assume it has something to do with video processing... some sort of adaptive contrast across the frames that are stitched together to create the video. If you could watch this, for example with a pair of binoculars from the space station, the stars would not seem to get fainter as they pass from below the airglow to above. In fact, if we go just a degree or two below the airglow layer, the extinction climbs rapidly and stars get much fainter, just as you would expect.

There are some spectacular refraction effects seen from orbit that occur in the lower atmosphere well below the airglow level. The refraction is nearly zero about two degrees above the Earth's limb near the air glow level (as seen from LEO) and climbs to about one degree right at the Earth's limb. That leads to big differential refraction for any celestial object with a semi-diameter. I'm attaching an edited version of moonset as photographed by an astronaut aboard the space station back in 2003. 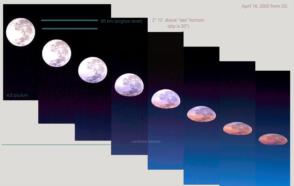