GLOBALLY:
Tonight the Moon is Full and Mars is at opposition. That means you should play the opening scene from "2001" showing the syzygy with a little musical flair! The Sun, Earth, Moon, and Mars are all in a nice straight line tonight around 0500 UT. For large parts of western Europe and North America, the Moon will be occulted (say "eclipsed" when you're talking to people who don't know astronomy jargon) for up to an hour.

The exact timing of the occultation is location-dependent. In other words, it's affected by the lunar parallax. Some events on the Moon occur at the same absolute time for every observer on the Earth. Some events involving the Moon are unique for each observer and require some computation to reduce them for time or other navigation purposes. There's a simple rule for this. If the event you're observing is on the Moon or physically close to the Moon, like in lunar orbit, then observers on the Earth will all see nearly the same phenomenon at the same absolute time. In parallax terms, the Moon and anything on or near it have the same parallax. If you're observing an event involving another object that is at a significantly different distances from the Earth, either much closer than the Moon or much further away, then the difference in parallax matters and everybody on Earth sees something different. Tonight as the Moon occults Mars, the parallax of the Moon will be 54.78' while the parallax of Mars is 0.27'. That's a big difference.

LOCALLY:
Since many NavList readers including me are located in New England and the northeastern US, I'll focus here. And here, it's raining right now. There's a large system of clouds running nearly along the grazing occultation band across the eastern US. In New England that band runs from the vicinity of Portsmouth, New Hampshire on the coast and then trends southwest to the mutual border point of Connecticut, Massachusetts, and New York. The band is about twenty miles wide, and within the band Mars will slide along the Moon's southern limb partially hidden by the Moon. Since this will be happening near the Moon's southern edge, it's a nice opportunity to see the mountains and other relief features near the pole through a medium-sized backyard telescope. Both in fiction (see season 1 of the enjoyable alt-history Apple series "For All Mankind") and in reality the valleys and craters among those mountains will be the target of lunar exploration and "water mining" in the near future.

The huge shield of clouds over the eastern US should be breaking by the time of closest approach of Mars to the Moon (11pm-midnight in the Eastern US). If you try to see it, be patient for breaks in the clouds. And use binoculars. Mars is very bright, but the Full Moon can be blinding. By surface brightness Mars tonight is about 0.9 magnitudes fainter than the Moon (per square arcsecond or equivalent). That's significant. It's not overwhelming but Mars will be much easier to follow with binoculars or a small telescope. Also, find a nice warm chair. For us in New England, the occultation happens close to meridian passage, and the Full Moon in December necessarily tracks across the sky like the Sun in June. In other words, watching this will be a literal "pain in the neck".

I made a little animation of a cloud forecast (attached). These forecasts are useful but not high accuracy. They can give us some idea of what to expect. 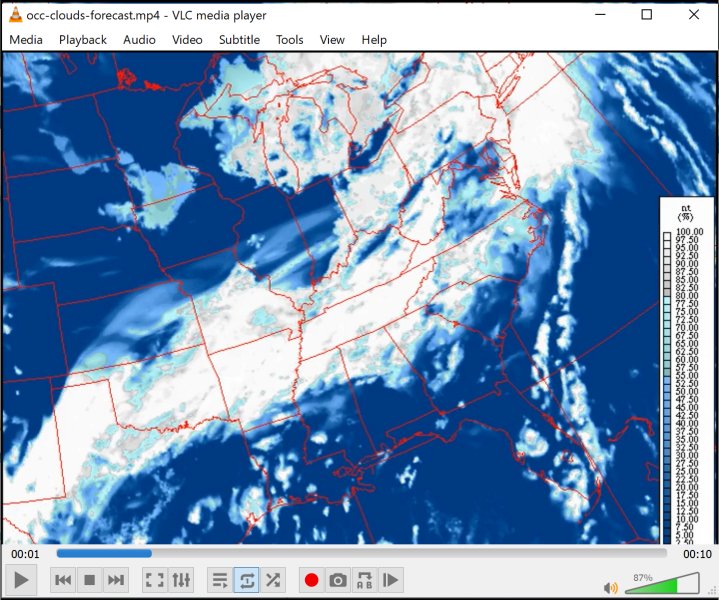 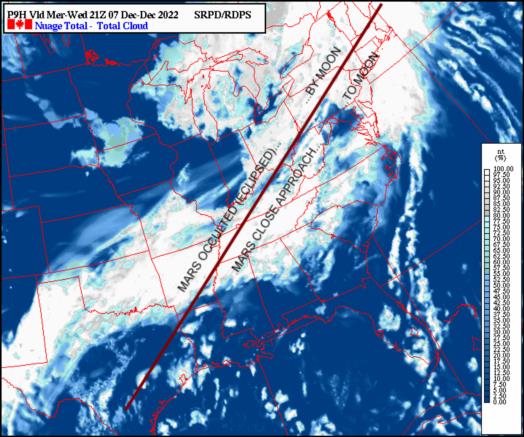 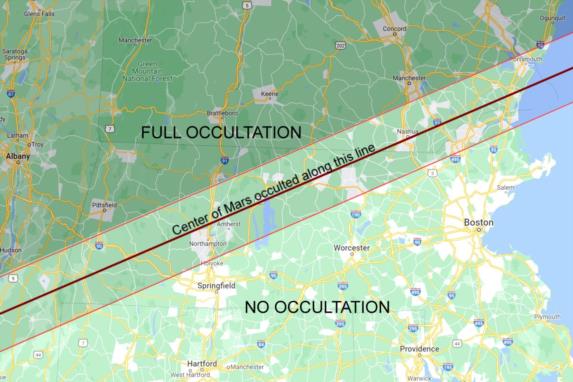