Yes, I think the term "Observer" here refers to the commonly used term for RAF navigators in early WW2,  no relation the the "observer books of birds etc which we all had as kids. (unless that series derived from the wartime books?)

Apologies, it is a chapter on Flying Boat  sextant, not airship, which is not mentioned. Interestingly there is no mention of bubble artificial horizons on this which looks like a normal marine sextant. He does not mention how it was used on the flying boats, but says they used the natural horizon, so presumably only useful at very low altitudes as per the Tasman flight?

Out of interest, Chichester seems to have mastered a "one handed" sextant technique for the flight. Has anyone tried this with a box sextant? I've never seen one so have no idea what would have been possible.Also are they as accurate as a good marine sextant with micrometer?

It would be interesting if we could solve the mistery. To Box or not to Box, that is the question! 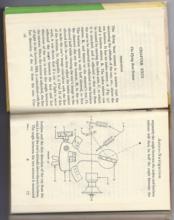