I was watching the documentary, saw Herr Pruss with a sextant and immediately remembered your questions about airship sextants.

Based in the angle of the window he's observing from, I think we can safely assign his position in the gondola.  Additionally, the position of the index arm and outside daylight, makes these observations low altitude observations of the sun (probable).

Hi Brad
I think it’s almost certainly a Plath sextant with a Coutinho spirit level attachment as shown on P162 Fig 171 of Peter Ifland’s ‘Taking the Stars.  You get the best view just as the observer removes the sextant from his eye and puts it down at 1:06:44.  I’m reasonably sure that the observer is Max Pruss who was subsequently Captain of the Hindenburg at the time of the disaster.  Wikipedia shows him on the Graf Zeppelin looking like Photo 1.  It’s not easy to find a shot of him without a sextant-using, screwed up  face and wearing a cap, but the shot at 1:06:44 of the observer without a cap after he’s put the sextant down looks very similar to Pruss third from the left in photograph 2.  For his Hindenburg photos, of which there are many, he was seven years older, and post Hindenburg his appearance changed because he was badly burned returning to the burning airship in an attempt to rescue other crew members.  DaveP 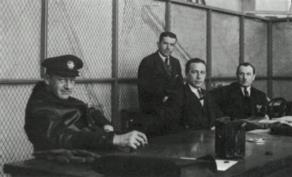