Thank you for your very detailed response.

I had hoped that New England whaler’s logbooks may perhaps have recorded the star’s eruption in the 1840s but from your reply I understand that there is very little chance for this.

Nevertheless, should one such report (or a few more) eventually turn up, that would still be useful.

Thank you for pointing me to Frew’s 2004 publication, I will study it this evening.

Rob van Gent, you wrote:
"At the moment I have no clue why Argûs had a circumflex over the ‘u’, I only had Latin for one year at school (long, long ago) but I can check some 19th-century star catalogues and atlases."

Please don't waste any time on this unless you're curious, too. I've already done some digging and wasted too much time on the question myself. It is the most trivial of trivia, and I am merely puzzled by it. Seems like a lot of effort for the typesetters to dig up the u with circumflex! This choice does seem to be the norm in the lat 19th and early 20th centuries.

Especially in navigation tables, the original constellation "Argo" was respected even in the 1930s. The form "Argus" is apparently suposed to be the genitive of "Argo". Any star is listed within a constellation, of course, and the star's Bayer designation is the Greek letter plus the constellation's genitive form. So we get "alpha Centauri" in the constellation Centaurus, and "beta Ursae Majoris" in the Ursa Major, and "gamma Leonis" in Leo, and so on (this is standard astronomical naming, and I'm only adding a description for others following along who may not not clear on the naming practice). The star Canopus is the alpha star in the Classical Ptolemaic constellation "Argo" or "Argo Navis" so its Bayer designation is "alpha Argus". For some reason they stuck a hat on the "u" in Argus! :) If you come upon an explanation or even just a discussion somewhere, I would be pleased to hear about it. But as I say, it's strictly for the satisfaction of my curiosity over a bit of trivia.

A bit more: I knew a couple of navigators when I was young (who were old back then and have long since passed away) whose pronunciation of the designations of those stars may be relevant. They pronounced "Argus" exactly like the English word "argue". The star we know today as "gamma Velorum" was "gamma Argus" which they both pronounced as "gamma ARGUE" (this star is/was also known as "Regor" which I recently observed at meridian passage at a peak altitude of 1.4°). It is just barely possible that the u with circumflex was intended to imply that pronunciation. That's nothing more than a guess. It's all I have for now.

You continued:
"You mentioned that the star was occasionally noted in whaler’s logbooks in the 1840s."

Sorry for over-stating that. I mentioned that those whaleship crews "certainly saw it" to provide an entertaining "hint".

We can, in fact, be absolutely certain that hundreds of whaleships from New England were in the right place at the right time to have seen Eta Carinae (the former Eta Argus) blazing in brilliance, brighter than Canopus, in the southern Milky Way in the 1840s. The location was more or less symmetrical on the other side of the Southern Cross from alpha and beta Centauri (see the attached image which I made for my own interest --Eta Car is the very bright unlabeled star). I know of no evidence of any record of such. And it's also possible that not one of them made a formal note of it anywhere. Navigators in that era, unfortunately for this story, used the Sun almost exclusively and, if they knew the stars, they knew the nine lunars stars, the North Star, and presumably a few basic star patterns like the Big Dipper. Astronomy was not a popular subject in the United States yet, though it was growing rapidly.

You mentioned the paper by Innes from 1903. There is a more recent paper (2004) by Frew, which seems carefully researched to me, that has filled in the light curve quite nicely:
http://adsabs.harvard.edu/pdf/2004JAD....10....6F. Frew's light curve is also present in the Wikipedia article on Eta Carinae.

There's an irony in that British Nautical Almanac listing that I mentioned. They're displaying data for Eta Car in the list of potential navigation stars (the long list of about 175 stars) at a time when its brightness is near magnitude 7 or 8. This date is also the beginning of a long gap in the light curve. Professional astronomers lost all interest in the star while some of the nautical almanacs were still carrying it as if it were a bright star. It's as if the almanac editors were betting on a resurgence... 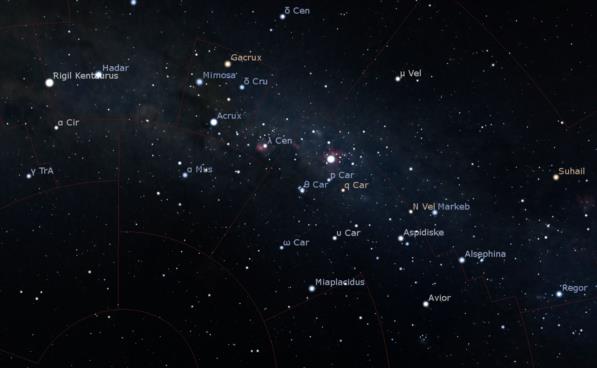