Thank you. Wikipedia has some good article on constellations and asterisms, but some of the asterisms are local lore, and "local" may be as small as one astronomy club somewhere! Coincidentally (there's a lot of that going around!), NASA's apod for yesterday, 1 Jan 2021, is a deeply exposed (over-exposed??) very wide-angle photo of the southern sky about 60° tall from north of the Southern Cross --and including the Eta Carinae nebula-- through that so-called "Diamond Cross" and across the barren south celestial pole area to the Magellanic clouds. And you know the exposure is deep when globular cluster 47 Tuc looks ten times brighter than beta Hydri.

There's a comment in the caption for the photo that may be a little joke. It offers advice to find the SCP: "Just look for south pole star Sigma Octantis. Analog to Polaris the north pole star, Sigma Octantis is little over one degree fom the the South Celestial pole." Yeah, couldn't be easier!

Speaking of beta Hydri... Stellarium users, have a look at the data for this star. It looks to me as if the proper motion data is incorrect. It's not really "close" but then again it's "in the same ballpark" as what I believe would be the correct numbers. Any thoughts? I encountered this by running the position of the star back to 1500 AD for some testing. It was shifted from where I expected to see it by a substantial fraction of a degree, which strikes me as quite an unusual error, if that's what it is, given that this is an exceptionally well-studied nearby star (24 lightyears distance) and an astrometric standard star.

Note: the attached image (below) is only a screen cap of a portion of the original. Here's the complete apod entry: https://apod.nasa.gov/apod/ap210101.html. 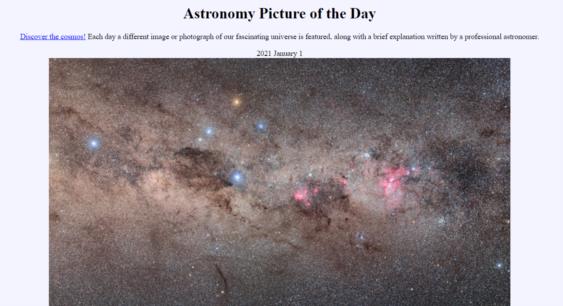