Somewhere in the archives you will find pics and posts on my Sunrule Kamal. The white plex shows a nice pink Sun through it. Discovered this as you did in the late 1990's while touring a green house that used white plex all around. I was surprised to see a nice image of the Sun through the plex. The next step was to silk screen horizons every degree in black on the white plex for a fixed length. I settled on a loop of  ball chain that required two hands to use. Had to do this to maintain desired accuracy.  One cool thing that I did was to put a stop in the chain using ball connectors. This allowed for doubled the angle shown on the plex by pulling the ball chain to the stop.  This proved very useful for doubling the angle on the bow in when pilot. Another unique feature was to place a mirror on the Kamal so that the observer could see his own eye. This insures perpendicularity  each time an observation is made.  Several of these Kamals were given to lucky Navlist members that attended the 2010 Mystic gathering.

The final evolution of the Kamal for me was the Bookmark Kamal that uses file folder material that is punched with 1/4 inch hole. The hole is filtered with solar film taped to the back of the hole. Horizons start at the hole and work down every degree in 1 cm increments. Arm distance is by tape measure at exactly 22 inches for 1 cm degree differences on the Kamal. This is the easiest Kamal to make that is accurate to about a tenth of a degree for low altitude observations and it doubles as a book mark in the Nautical Almanac.

P.S. FYI for sextant filter shade replacement it is better to use solar film rather than welding glass or plex. Solar film is rated for the job and available commercially at reasonable cost. 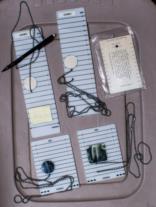 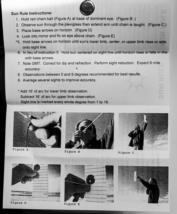 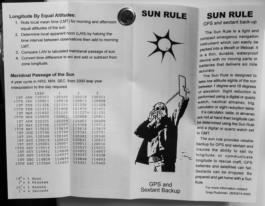